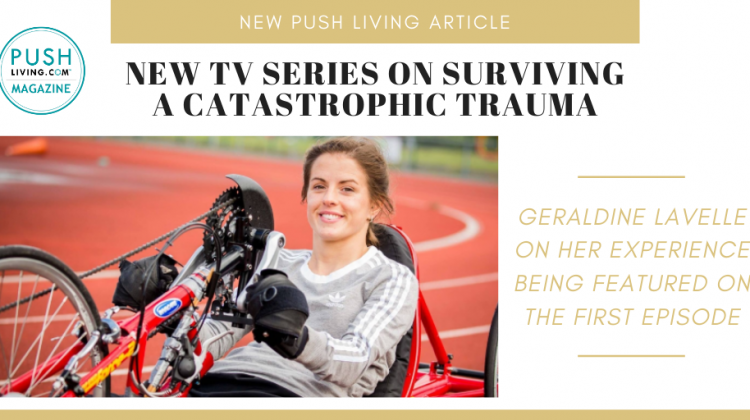 I was truly honored and humbled to be part of a television series called “Survivors” that was created by RTÉ (Ireland’s National Television and Radio Broadcaster) about people who have suffered trauma in their lives, but found the inner strength to take stock and rediscover a new sense of purpose.

In this series, clinical psychologist Paul D’Alton met and interviewed four people who have shown superhuman resilience as they rebuilt their lives following a catastrophic event. The first in a four-part series aired on October 1, 2019, and in the first episode, I, Geraldine Lavelle, was interviewed by Paul D’Alton.

I suffered a spinal injury in a 2013 road accident which left me with limited movement and sensation below my shoulders, and I had to work through changes that went way beyond just physical, there was a mental shift that I experienced as well. When transitioning through this entire process, you’re faced with how you go from one way of life to another, literally overnight, and you realize the power of your mind. With sheer determination, and a lot of hard work, I got my life and independence back, and in the process, became an inspiration to others.

The show got great reviews, and it even got nominated as “Show of the Day” by The RTÉ Guide!

The Sunday Independent called it a “A fascinating new series”, and the Irish Independent remarked “How do you pick up your life again after suffering severe trauma? Answer: with great courage, inner strength and incredible, indomitable spirit, if the people showcased in this new series are anything to go by”.

The show was also given the status of “Critics’ Choice” by another well known Irish newspaper.

I truly enjoyed the experience of appearing on “Survivors”, and was delighted that they felt my positive approach to life made me an inspiration to others, and to be viewed by many as a role model is an honor. My mailbox and Facebook have been full of positive feedback with lots of support from those comending me for my honesty. It feels great to know that by me telling my story, it’s given others hope and strength to overcome their daily challenges.

Since taking part in the series, one thing a lot of people talk to me about is anxiety and depression. Perhaps they feel that I can relate to their human struggles and have a greater understanding of their emotions.

Overthinking causes your mind to create negative scenarios and replay painful memories. This consumes your body and mind with irrational thoughts and a racing heart. Anxiety suffocates your mind with lies; but if you relax and focus, taking each day as it comes, everything will be fine. You do not need to solve every problem at once, including the ones that have not or might not happen! My advice is this, don’t wait for everything to be perfect before you decide to enjoy your life. Live in the now and enjoy everything you have.