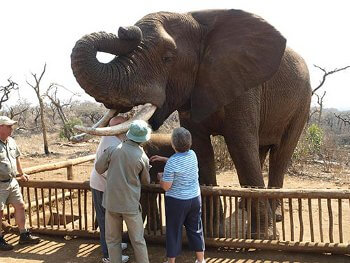 Africa?
South Africa?
Going on Safari?
In a Wheelchair?

You must be mad. It cannot be done!
Just some of the (printable) comments made when I first suggested a trip to Africa to celebrate our Silver Wedding Anniversary. If there is one thing that has kept me going since an accident left me in a wheelchair six years ago, it is the thought of a challenge. A couple of years ago I took part as a crew member in the Tall Ships Race on the leg from Waterford to Greenock, but as challenges go, a Safari was going to be a goody.

My first task was to convince my wife, Carol, that the long flight would be worth it. Carol doesn’t like flying, and the thought of an eleven-hour flight filled her with dread. We are both keen on watching wildlife, so a diet of the Animal Planet and my nagging, along with the promise that she could use as many sleeping tablets as she wanted, eventually convinced her that we should make plans. A search on TripAdvisor didn’t help, so bring on Google.

One company jumped out of the page at me – www.access2africasafaris.com.

Their 12-day Safari seemed to be exactly what I was looking for so I contacted Jennae, the owner. She was so helpful that I made the decision there and then to let her handle all of our arrangements in Africa, and I would book the flights.

The flights were booked through South African Airways. It was good to see our luggage disappear at Dublin Airport and reappear at Durban. Unfortunately, the aircraft was very cramped and uncomfortable for an eleven-hour flight. We will certainly look at other airlines if and when we go again.

We arrived in Durban mid-morning, and it was great to see Jennae and our guide Dave Davies waiting for us. Our first few days were to be spent at a resort called Makaranga, outside of Durban. It was a most beautiful place. The grounds were immaculate with lots of rare trees and shrubs. Carol visited a wildlife park to see the crocodiles and handled some of the largest snakes she had ever seen.

A highlight of our trip was to renew our marriage vows exactly 25 years after we first got married. We did this with some human witnesses and four zebras, who came to the rails to find out what all the fuss was about. 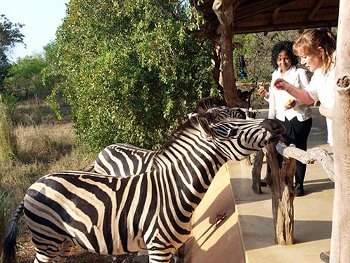 Now we could get down to the game drives. With Jennae and Dave as our guides, we spent a few days driving through the local game reserve. We could not have asked for better guides. They seemed to have a sixth sense about spotting the animals and birds. Absolutely fabulous. We also visited a cheetah rescue centre where we were able to get up and personal with a cheetah and some cheetah cubs. To be able to hold a cub like that was quite something. We also visited an elephant centre where wild elephants visited every day to be spoilt by the visitors with feed. To get that close to a fully grown wild the elephant was a wonderful experience. Then we moved on to St Lucia. No, not the one in the Caribbean, we were still in Africa. A boat trip there introduced us to hippos, crocodiles and the Goliath heron amongst others. From there, we returned to Durban and flew on to Cape Town, but that is another story.

Jennae and Dave have a vast knowledge between them, and they arranged everything to make life easier for me in my manual wheelchair. I would certainly recommend them to any disabled person who thinks that visiting South Africa is unobtainable.

A tip – South Africa has world-class medical care available and should you need assistance, rest assured that every need will be taken care of.

John and Carol Robb
Ireland
May 2013

To book a South African Adventure of your own check out the Accessible Travel Deals section and explore your options! https://pushliving.com/category/travel-deals/