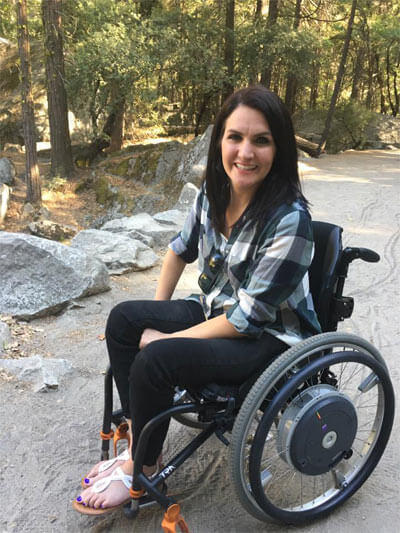 Note: Please excuse the minor technical difficulties experienced during the taping of this podcast. We felt the content was well worth publishing and hope you find it to be an informational and insightful discussion

Many of you who follow PUSHLIving.com web page, will already be familiar with Gina Schuh and her pointed and no holds barred writing on issues from dating to parking to medical supply costs.

Gina, a C-5/6 quadriplegic, describes herself as a “politically incorrect foodie who is an equal opportunity offender.” While some may not agree with her robust and impassioned stance on issues, she has certainly earned the right to them.

Gina graduated with a degree in law from Arizona Summit Law school after she was injured and is now finding her true passion: Advocacy.

She grew up on a farm in California, and her first real passion was food, and you’ll often find her posting the most incredible food pictures on her Instagram at culinary.quad. She has recently even taken one preparing fresh meals and homemade treats for her pup who was having health issues.

Following her divorce in 2014, Gina found herself back in the dating game after being off the market nearly ten years. She has been with her current. and from what we can all see, lifetime love Nick for over a year now. After people had observed her success in dating, they asked for tips, which eventually led to her regular contribution at Push Living’s Online Dating series for a woman. You can read more under our Romance section.

Her intelligent, no-nonsense, “bare bones” approach IS making a fast impact in her Arizona district. She has started a website and movement called AccessibleAz.com and held what she coined as the inaugural “Gimp Gathering” in her home to gather the local disability community.

We are also happy to announce that this work has led her to accept a role as Editor of Law and Advocacy at PushLiving.com