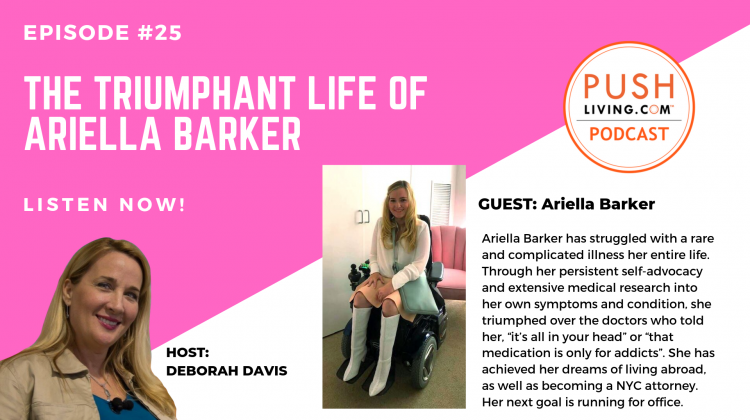 We recently interviewed Ariella Barker for PUSHLiving Podcast where she shared her struggle with a rare and complicated illness that overcame her life and nearly ended it. She was able to to save her own life through her persistent self-advocacy and extensive medical research into her own symptoms and condition.

Ariella refused to give up and triumphed over the doctors who told her, “it’s all in your head” or “that medication is only for addicts”. We wanted you to hear the inspirational story of her life because we can all learn from her experience. You’ll be empowered to be your own advocate, and learn how to succeed in trying times when you barely have the strength to fight.

“When you refuse to give up or give in, when you believe in yourself, when you know your worth, the world will benefit from your gifts.”

We had the pleasure of first meeting Ariella when she applied as a model for our disability-inclusive PUSHLiving Photos project.  She submitted some beautiful images that revealed the true confidence and self-acceptance of a woman who has experienced disability since birth.

Ariella continued working with PUSHLiving by becoming a writer for our magazine. She was a young woman in a small town in North Carolina, and the articles she contributed had incredible depth, perception, and wisdom. She was crowned Miss Wheelchair North Carolina in 2014, and remains a fundamental romantic and idealist.

“I would say to anyone who is chronically ill, and if you are a woman or a person of color, do not go see a male doctor, particularly white male doctors, find yourself a female doctor or a doctor of color. If you are living on a chronic opioid regiment, look into Buprenorphine.”

Here is more of what you will learn from this impressive and articulate fighter:

The Disabled Vote: Why This Largest Minority Group Can No Longer be Ignored by Candidates

Shopping While Disabled: From Retail Therapy to Retail Disaster