Alana Wallace is a powerful woman. She is a successful, beautiful, talented, adventurous 66-year-old woman who is living life to its fullest in the city she loves – Chicago. Alana is having the time of her life traveling the world and exploring her many passions with her family, and friends.Alana describes her life as one of ‘a series of oxymorons’ from adapting as a child (who underwent numerous orthopedic surgeries and used crutches) while playing hopscotch and double-Dutch rope – to being a young African-American wife – and later a single mom in Chicago who raised an extraordinary son, John Aaron. John is a celebrated doctor that has been recognized for performing innovative stem cell research in the field of regenerative medicine.

Alans uses her life as an example to show the world that “beauty and disability” do go together. This desire is evident in everything she does from her ONE-OF-A-KIND (SEANCO) CUSTOM MADE Swarovski crystal-covered wheelchair to her extreme passion for helping others to dispel stereotypes.

Alana is indeed a wonder woman on wheels living in the “sexiest” part of town in Chicago – The South Loop! She loves her vicinity because everything is in rolling distance…a post office located in building, doorman, gym, restaurants, and shopping are all nearby. 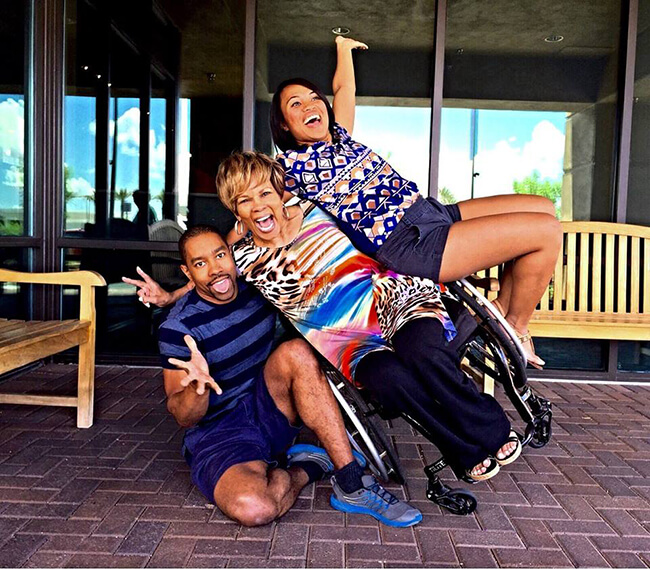 Alana’s proudest accomplishment is raising her son to be the determined, compassionate, successful Doctor that he is today. As a single mom with humble beginnings, things were not always easy, but these difficulties forged the relationship that she enjoys with her son John.

John is a Physical Medicine and Rehabilitation doctor who is married to his soulmate who is also a doctor. They reside in Denver and Alana visits them often. While John says that his mother’s disability did not contribute to him wanting to go into rehab medicine, he says that the exposure to a disability on such a personal level does give him a significant advantage over others. Her disability taught him independence at a young age but not because he felt responsible for having to do other things but because he was proud to be able to help his mom. He is able to think of things that other doctors may not think of in terms of accessibility. 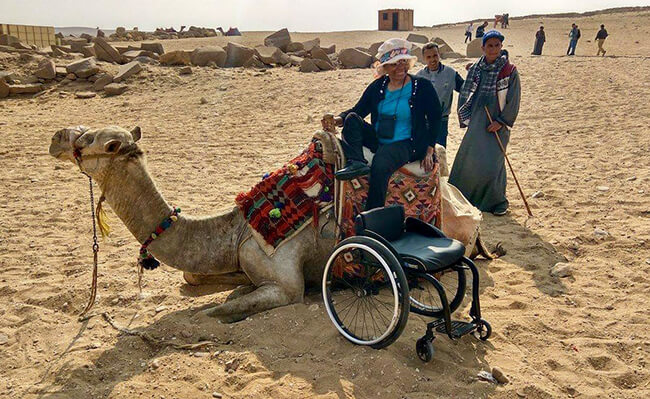 He and his wife took both of their mothers on a lavish trip to explore Abu Dhabi, Egypt and Dubai for their 65th birthdays! First class on Emirates! 6 -days in Dubai 4 Abu Dhabi and three days in Egypt. One of the best experiences was being able to ride camels on a desert safari. They didn’t miss a beat!

Parts of the trip were a challenge due to accessibility, but that challenge was met with determination. Alana and her son have always had a remarkable bond that has conquered any ‘detour’ thrown at them. 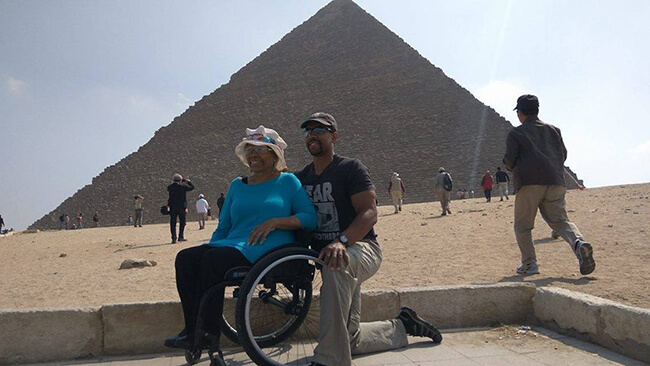 He carried her all the way up to the pyramids!

Their unique bond was demonstrated last year when her son quickly jumped on a plane after hearing about his mom’s devastating fall last year. The fall left her with a torn rotator cuff.

She popped a wheelie to get over the threshold, front wheel landed in the uneven pavement, “I was popped up quickly onto my chair by those who came to help and out of embarrassment, and the next day realized I really hurt my shoulder.” Her son immediately flew to get her, take her to Denver, CO and begin her rehabilitation. (The perks of raising a son who is a successful doctor). Despite these injuries, she is pushing past it…though not yet at her best.

At the age of 5, Alana contracted polio that left her feeling different/separate from friends and family. She fought to “fit in”. She endured countless orthopedic surgeries throughout her young life. She always managed to excel and adapt to anything she did. She attributes this to her parents ‘no coddling approach.’ She states that her mom gave her chores to do, such as washing the dishes. If she couldn’t stand the entire time, then her mom would pull up a chair and she would do the dishes sitting down.

However, her worst pain came a few years ago when she lost her mother and aunt on the same day. Losing them on the same day was an unthinkable tragedy. Then, a few days after she buried her mom and Aunt, she had to deal with an unexpected break-up with her significant other. It was all too much for her to deal with.

After isolating for a long period of time, Alana began doing everything she could to pick up the pieces and rebuild her life. She considers this time, a period that “knocked her flat.” Her faith, resiliency and her family are what helped her get through this tough time.

Dating and Getting Back to the Full-Swing of Life

She has tried her hand at online dating, and it can quickly be discouraging, (you have to have your mind right), and she has had a lot of funny experiences. She used to hide her disability (hiding her braces under pant legs), but now she is proud of who she is which has made dating much easier though still tricky. She now rocks her fashionable (early attained) silver hair with pride and grace. Her advice for the rest of us mere mortals is to embrace yourself entirely, to be comfortable with yourself and to find strength in everything including disability.

Clearly, this was not a woman that will stay down for long. Alana turned 66 this year. She hopes she has made and will continue to make her mark on the world… and change perceptions of what a woman her age, cultural background, with a disability, can and will do! 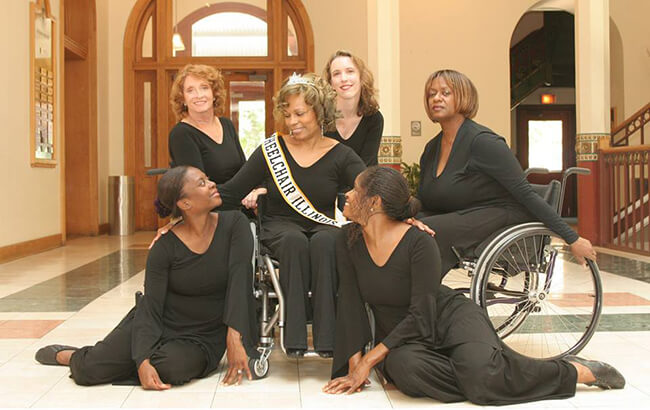 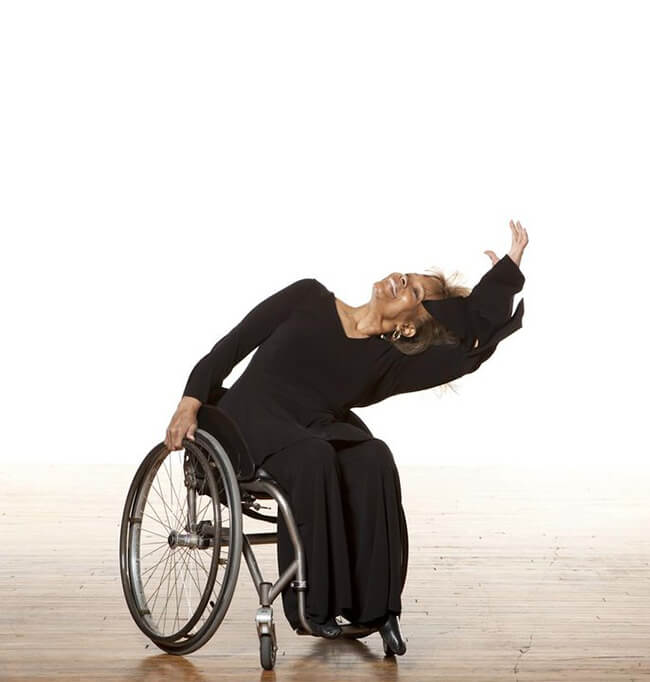 Disability Independence. In 1996, they also performed at the Paralympics in Atlanta, GA. You can find out more on their FaceBook page Dance>Detour. They have won many awards and have collaborated with many well-known dance troupes educating thousands about the power of inclusion.

Alana knew at a young age that she wanted to ‘dispel stereotypes’ and that stirred a ‘burning desire’ inside of her to be seen as beautiful. As she came into her adulthood, she wanted that same feeling of acceptance and celebration for people of ‘all capabilities.’ She has since retired from Dance>Detour to live out her golden years with travel, friends, and family.

She now makes the most beautiful cards, with themes, and designs personally made by her which are then hand embellished. While she loves to depict cute characters with disabilities, she would rather focus on the creative side of the process, versus the marketing aspects of the business. Feel free to share these greeting cards and help her get the word out via the PUSHLivingStore. 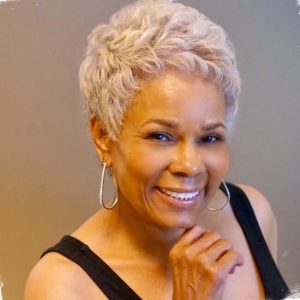 Now, that she has reached this milestone so beautifully, Alana is comfortable and happy and wants to be “able to be represented as a WHOLE person leading a FULL life — as an artist, an entrepreneur, a health-conscious person, a loving friend, and a sexy, sensational lady.”

Alana hopes that everyone can see the beauty in our “capabilities” as she prefers the term to be positive. She used her wheelchair as ‘a tool to dance and as a tool to assist with carrying [her] child.’ She hopes that the world will learn to see adaptive equipment as just that, tools to help people live their lives to the fullest extent. At every point in her left, she took something that wasn’t supposed to be for her; motherhood, dance, beauty, success and made them hers, exceptionally well. She hopes that others can learn from her example that if you want it, you need to go and get it.

Alana has the determination to help others build a life of health, meaning and spiritual positivity through her work (see her fantastic “CRIPMark cards” on PUSHLiving.com) and follow her Facebook page Wheel Beauty.