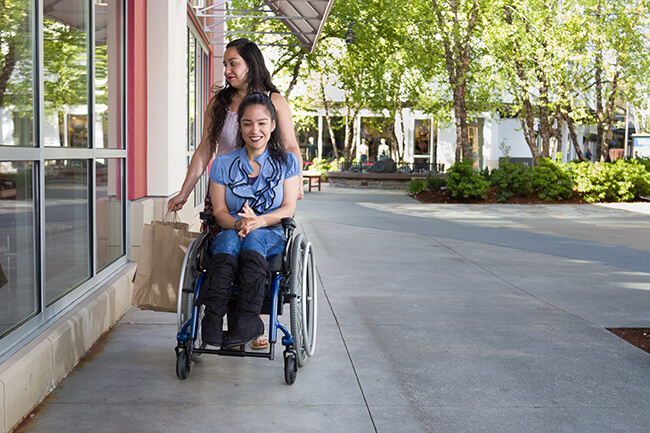 The author has chosen to remain anonymous in order to protect the identity of her caregiver.

A year ago, I was accepted into a buy-in Medicaid program for disabled working adults. The program allows disabled adults to work by providing us with in-home caretakers, the only insurance which provides such coverage. Unfortunately, no government-approved home-health agency would take my case because, inter alia, they were short-staffed. They simply couldn’t find Americans willing to work a low wage position that entails lifting and the intimacies of care-taking. So I had to hire and pay an independent contractor caretaker out-of-pocket to have my basic needs met. I had only three requirements for the employee: 1) she could transfer my 100 lb frame; 2) she didn’t steal or have a criminal record; and 3) she wasn’t an addict, who would steal my medication, which are vital to my functionality.The first woman I hired was an American citizen who lived nearby. Within a couple days, I realized that she and her husband were addicted to meth and opioid. During the short duration of her employment, where was late over 90% of the time, I was terrified she would steal my medication or valuables.Another woman I hired was through an agency, suggested to me by the Department of Health and Human Services. She, too, was an American citizen. The agency only gave me her first name, and within her short ten-day tenure, she told me stories of her family’s gang affiliation, having been fired from previous jobs for getting in physical altercations and stories of how she abused her adopted grandchild. The stories made me so uneasy, that I, ultimately, investigated and determined her full name. I ran a background check, and it listed a long criminal record, complete with mugshots for larceny and resisting arrest.

With both terminations, I was terrified that my and my family’s lives were at risk, because these women had my address and could violently retaliate. But I kept looking, because, with a working mother and elderly grandparents in their 80s with health issues, the only other option was to be trapped in bed. So I went onto www.care.com. Within a couple days, I interviewed this incredibly warm and caring West-Indian woman who lived less than five miles away and worked as a Certified Nursing Assistant (“CNA“) for a government-run nursing home. Instantly, I knew she was a great match and her references, non-existent criminal record and impeccable background check confirmed that gut feeling.

Throughout her employment, I learned that as a small child, her mother died of a stroke at the age of 42, and her father remarried an American woman. At the young age of 12, she immigrated to this country with her father to live with his American wife. Her stepmother sponsored them for their green cards, and soon, she had a green card and a social security number. Being a child, she was ignorant of the immigration laws. And because her stepmother never informed her of her periodical notices to renew her status as a legal permanent resident after her father passed away, she unknowingly lost her status. Nevertheless, she went on to college, got her CNA license, worked for a government-run nursing home and paid her annual taxes.For her entire adult life, she had no health insurance, despite having dangerously life-threatening high blood pressure and being a prime stroke candidate. Because she was unable to afford it and her part-time position at the nursing home didn’t offer healthcare, she was uninsured. So, when I encouraged her to sign up to ObamaCare, she was excited at the prospect of finally having healthcare. But after inputting all her information, she was shocked and bewildered when the site could not determine her legal status. Not privy to any of this information, I noticed that she began canceling last minute on me frequently, which was out of character for her. She kept telling me she had important appointments. But when I inquired about these appointments, she dodged the questions. Being the intuitive person I am, I suspected it had something to do with her status, due to her increased anxiety since Trump’s inauguration.So, one day, I just told her, “look, I pretty much suspect you’re undocumented. And I don’t care because you take care of me and better my life. You don’t steal from me or take my medication. You shouldn’t feel scared to tell me.” Initially, she denied it, but I watched her panic ensue right before my eyes. Her blood pressure soared, she nearly fainted, and she was sweating profusely.She took me to an outpatient procedure, during which she sat in the waiting room, sweating, in a state of panic. Should she tell me? Was I trustworthy enough not to report her? The Trump administration made her practically agoraphobic. As a black woman in the South, she was afraid that she could be pulled over for any little thing and sent to a detention center.After I was out of recovery, she said, “Okay, we’re going out to dinner…my treat. If I’m going to tell you all my secrets, I need to do it over some food and alcohol!” There, she confessed how she found out, after thirty years of living in this country, that she was undocumented. Her mysterious appointments were with an immigration attorney to try to ascertain her status, only to find out that her green card expired long ago.After caring for the most vulnerable among us, enduring patients who spat racial epithets at her after she changed their diapers, going to college and incurring student loans, and committing not a single criminal offense, she was, in the eyes of our current administration, “illegal,”…a criminal. The person who made me able to get out of bed, shower, get to appointments and, most of all, work and contribute to society was, now, a criminal.Last week, the Immigration and Customs Enforcement (“ICE”) and the Trump administration announced that DACA (The “Dreamers Act,” giving undocumented individuals, who were brought here as children, a path to citizenship) would not be an absolute protection, and that the entire program would likely be eliminated.So, yesterday, after telling me how terrified she was over possibly being forced to return to the Islands, where her certifications weren’t recognized, she put in her two weeks notice. I could not knowingly employ an undocumented worker. Her terror of deportation left me with the panic of needing to immediately find an honest documented caretaker. Losing her help meant losing my independence and my ability to work and have a purpose in life. Worse yet, losing her meant losing the ability to bathe or even get out of bed.Trump’s hostility toward immigrants, even toward those who were brought here as children, not only shows how deeply our President lacks empathy, but it strikes fear into honest, law-abiding, loving, caregiving people, who dedicate their lives to helping the most helpless Americans in this country. Eliminating DACA and making our existing immigration laws even harsher not only harms immigrants who contribute to our society in a way our fellow Americans are unwilling to do, but injures those Americans, like myself, who rely on such selfless people. It leaves disabled Americans to search for an American who isn’t a criminal or opioid addict, and is willing to perform underpaid intimate manual labor.Moreover, these deportations leave the healthcare industry further short-staffed. And the immigrants will not only be forced to emigrate into an unfamiliar country, in which they have no ability to make a living, forcing them into poverty, but their student loans will go unpaid, and their American patients will be left with no dignity. Eliminating Dreamers from our country strips immigrants of their dreams and many disabled Americans of our dreams of independence and self-determination. In short, it strips this country of the very definition of the American Dream.