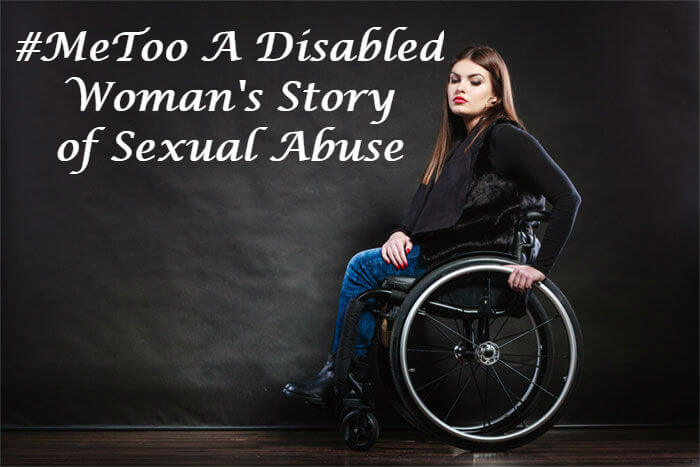 The #MeToo movement was created a decade ago by Tarana Burke, a black woman who wanted sexual assault survivors in marginalized communities to be able to connect.

Against today’s backdrop of courageous women stepping forward to tell their stories and powerful men falling like dominoes, it’s important to acknowledge that disabled women can be emotionally and physically vulnerable to sexual assault and abuse. Here is one woman’s story…

A tall, handsome stranger approached me with an awkward hug. Our conversation was mundane. We talked about family and friends, about work and hobbies. I smiled at him and laughed at his jokes – and he did the same. Wow! Here was my bad boy, the one I’d dreamt about.

He convinced me to take him home, and what followed was a night of sleepless sleep, during which I could not wipe the smile off my face. His acceptance and desire meant so much to me that I yearned to call my little sister and tell her.

He called a few nights later and drunkenly proclaimed that he could not see me again because of my inability to get pregnant. I didn’t stop and consider that this conversation was happening too soon, even though I had no idea where he was coming from.

Instead, I relived those hours of feeling wanted – of the intense ﬂirting and the playful look in his eye as he went for that ﬁrst kiss. I argued with him, making sure he knew I could and wanted to have children.

I saw his call for what is was – a flashing red light – but then I was overcome by feelings of loneliness. Work was going nowhere. My self-esteem was flagging. I had a few close friends, but no one to hold me at night and make me feel wanted. It was comforting to be in his arms, even if his snoring meant that I couldn’t sleep a wink.

So I invited him over, just to see if he was worth it. It meant so much to have his arms wrapped around me again. His desire was obvious, and his words – “When I see you, I just can’t help thinking…” – got me to bed again. I was so happy to be sexual active after a long hiatus.

We talked about being “friends with beneﬁts,” but from my perspective, it was just talk. He said, “It’s going to hurt both of us when one of us moves on, but it is going to happen.” No, I thought, it is not going to happen. I am going to make it work, and we’ll be stronger than you would ever believe. I drank the Kool-Aid.

The relationship continued in this vein for the next seven months, and I consistently ignored all of the “Get to the nearest exit, IMMEDIATELY” signs. His best friend was supposedly head over heels in love with him, but she would not give him the time of day.

He had a son from a previous relationship. Never got his high school diploma or GED. He was working a minimum wage job. Having someone was better than having no one, right?

We had sex weekly, even though I didn’t want it. We engaged in sexual acts that made me uncomfortable, but I went along. I knew it was the only way I could keep him around. We would get into tiffs and break things off for a few weeks, and then make up and be back in bed. It was an endless cycle. The sex wasn’t amazing or even memorable. More often than not, I just felt awkward and ashamed.

One night, I just needed to hear that I was beautiful. I was at the foot of my bed, looking at the ground. I told him that, as a disabled woman, no one would ever look at me or give me a chance. I wanted to hear him say that those men had no idea what they were missing, that I was beautiful and sexy.

Instead, he said, “I’m glad no other man wants to touch you,” and then told me that my lack of desirability meant that he could do what he wanted with me. His cruelty broke my heart.

It was a few months after our ﬁnal hook-up that I went to see my gynecologist, who broke the news to me that the odd growths I’d discovered were genital warts. It wasn’t until I got home and researched it that I discovered exactly what this STD was.

I grew up extremely sheltered, and no one thought I would even have a prom date let alone a hook-up. So it was news to me.

When I approached him for having transmitted an STD, he denied it and claimed that I was a slut. I cried and told him that I might have been stupid, but that he was the only man I slept with in the past seven years. All I wanted was an apology.

Why did I allow this to happen to me?

I tried to ﬁnd someone to blame for all of this. There must have been a reason that I let a man speak to and physically do what he did to me. I was startled one night as I was explaining to a friend the story of what happened.

As I was talking, I flashed on the night of my eighth-grade graduation, when a classmate of mine yelled across the room, “Randy, you still owe me ten dollars for “dancing” with Eliza.”

That dance is forever etched in my memory. I wore a purple plaid skirt and a new purple tank top. I looked cute that night. I had also become a woman; my mom let me shave my armpits for the ﬁrst time. I remember feeling so grown up and pretty.

I sat in the backyard with a friend while everyone went in to get pizza. The sound of New Kids on the Block floated out the upstairs window. Two boys played cards at a table to the right of me, but I paid them no mind. As I sat listening to music, my classmate came up and asked me to dance.

He was not any boy; he looked like he could have been part of the New Kids. With no adults around, I didn’t know what would happen or if I wanted anything to happen. I gingerly stood up and danced with him. The song ended. There really was nothing more to say or do, so I got my walker and went in to grab some pizza.

When he called out to Randy on graduation night, no one, not even a teacher, stood up for me. It was then that I began to believe that I was not worth more than a ten-dollar bet.

My “Gate to Freedom”

Thus, the seeds were sown that would allow emotional and physical abuse to bloom when I was an adult. That eighth-grader cultivated the isolation that I felt my whole life. He caused me to doubt myself, and to subconsciously carry that doubt into adulthood.

I want to blame him for all the hurt I’ve suffered and my feeling that I can never feel loved by a man. I recognize that I need to forgive the boys and men that leveraged my vulnerability for their amusement or sexual needs.

As Nelson Mandela put it “As I walked out the door toward the gate that would lead to my freedom, I knew if I didn’t leave my bitterness and hatred behind, I’d still be in prison.”

I’m not there yet, but I’m working on it.