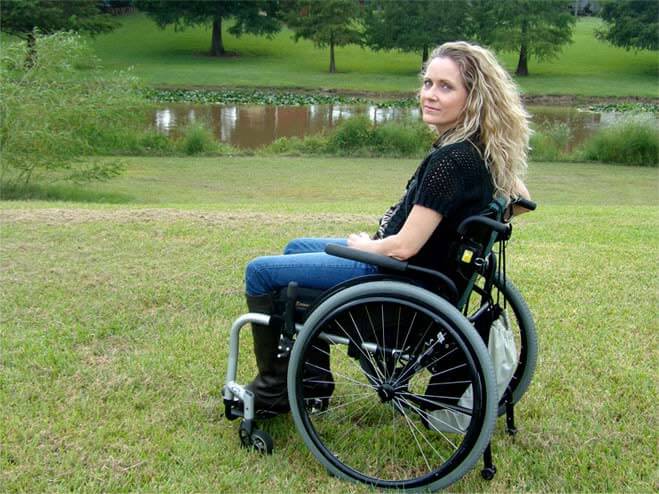 As a little girl, I had dreams of falling in love, getting married, having babies and living happily ever after, as most young girls do.  My dreams came true when I became an adult, but I would learn that the “happily ever after” was just a fairytale.  I would face overwhelming trials, battle seemingly impossible obstacles, and a devastating tragedy that would either destroy me or force me to redefine myself as a woman, wife, mother, and contributing member of society. 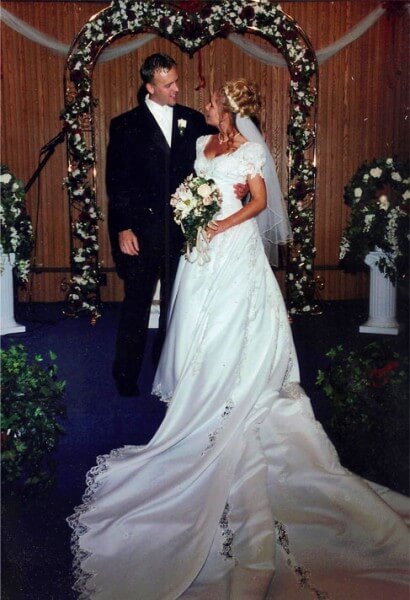 At the age of 23 and a single mother of an 8-year-old little boy, I met my husband Steve in Texas.  We were working for the same ministry and it wasn’t long before we quickly fell crazy-in-love with each other.  We married on August 7, 1999 and blissfully spent our honeymoon in the Cayman Islands.  Our first years together were happy and full of love and laughter.  We even went on a month long European tour of Germany, Switzerland, Italy, France, and Belgium.   We were blessed with two more beautiful children and everything was going just the way I planned it.   Life was good! 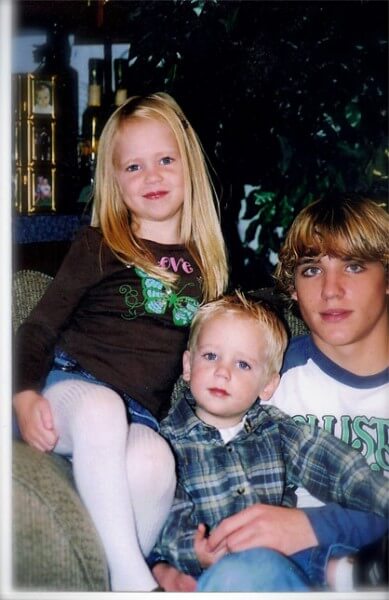 My husband continued working full-time for the ministry while I became self-employed and successfully ran my own cleaning business in order to be home more for the children and the needs of running our home.   Looking back, I find that I was very efficient in running my business and home.  My life was busy with church, work, home, family and friends.  My daily routine consisted of waking up, getting dressed, dressing and feeding the kids, work, making dinner, cleaning, bathing kids, paying the bills, and falling asleep exhausted only to wake up and do it all over again the next day.  It was during this time my husband and I started having marital problems.   Most of our arguments were about his free time being consumed with different sports and lack of affection and sex on my part.   A battleground formed between us and we weren’t going to back down.

Out of the blue one day, he approached me and asked the strangest question.  He asked “Do you think God forgives you if you confess your sin and repent but don’t actually confess it to anyone?”  That got my attention!  “What sin did he commit?” I wondered.  I wanted to know, I insisted really.  So we sat down together the next night with our Associate Pastor and Steve began to talk.  I was expecting to hear him confess to lustful thoughts or flirting with other women.  But what he said instead slammed into me like a Mack truck and crumbled my delusions of our perfect home.  He had been having an affair with one of my best friends.  She too was married with children and also happened to be the Pastor’s daughter.  We were all separately counseled (only one time) about the incident and told not to tell a soul because so many people and families would be affected by this devastating news.  We were also firmly instructed that there were to be no confrontations between us couples.   This was difficult because we lived in the same neighborhood as them, our children played together and we all went to the same church.   Leaving the church was not an option because we were told it wasn’t God’s will.  My husband was also asked to step down from the ministry and get another job.

What were we to do now to repair this damage?  I made up my mind to fight for our marriage because of the children and the fact that I still loved him.   I knew in my heart he was extremely sorry for what he had done and wanted to make things right, but I was completely broken and him confessing wasn’t going to fix it.  He had cheated on me and I didn’t see any warning signs!  I stupidly demanded to know every single detail.  Wanting to earn my trust back, he told me everything and the details would end up haunting me day and night.  The next few months I completely withdrew into a depressed fog but would explode into fits of rage which involved lots of screaming, crying, and breaking things in our home.   My thoughts were constantly consumed with the details (that I had stupidly demanded to know) of his betrayal.  I tortured myself with questions of what I had done wrong to cause this to happen and why I didn’t see the signs.  But I kept my word to the pastor and didn’t tell a soul of my despair.  My life was turned upside down and I had no one to help me deal with my raging emotions and broken heart.

A year later on March 23, 2006 little did I know on that night, we would be facing yet another devastating blow that would try to completely destroy the foundation of our already unstable world. By now, my raging thoughts and emotions were not quite as severe.  Instead, I had begun stuffing all of the painful memories down inside and self-medicating by drinking alcohol every night in order to dull the pain.  After the kids had gone to bed and with several drinks in me, Steve and I decided to watch a movie called “Unfaithful” (I know what you’re thinking right now, “That was a stupid thing to do!”) And you’re right, because it triggered all of the toxic memories and raging emotions to come boiling back to the surface like an erupting volcano that caused a catastrophic explosion that couldn’t be taken back.

We were halfway through the movie when I venomously began attacking Steve verbally.  We heatedly argued for a few minutes when he suddenly stood up, said he was going to bed and refused to fight with me.  After he left, I sat there for about five minutes fuming then stood up with a vengeance and marched into our bedroom with only one thing on my mind.  I wanted to hurt him like he hurt me.  With uncontrollable rage, I attacked him lying in the bed with words and fists.  I was in the process of throwing another brutal punch to his face (that blackened his eye) when he pushed me in the chest with both hands and enough force to knock me to the ground.  I fell straight back and hit the dresser with my head and lay there, unmoving.  Not saying a word but just staring up at the ceiling, I could hear a strange buzzing sound deep inside my body and realized I couldn’t feel or move my body below the neck.  I knew it was bad.

Steve was standing over me and reaching down to pick me up when I finally spoke.  In a soft voice I said, “Please don’t touch me.  Call 911.”  Around midnight, I was taken by ambulance to a local hospital and then air lifted to the Methodist Hospital in Houston, Texas where I was immediately taken into surgery.   Steve was taken to jail.  Hours later the doctors came out and told my family the grim diagnosis.  My C4-C5 vertebrae were shattered so badly in my neck that my spinal cord was stretched out in an S shape.  They said it was as bad as being severed and I would live the rest of my life as a quadriplegic.   To replace the shattered bone in my neck, the doctors took a bone from my hip and placed a stint in my right leg to help prevent blood clots, due to lack of circulation.  They used the bone to replace my shattered vertebrae and fused my neck back together with a titanium steel plate and two screws.  I was fortunate enough to only wear the confining neck collar, which prevented me from turning my head.  Most quadriplegics wear the Halo that is even more confining and screwed into your skull.  A Spinal Cord Injury (SCI) affects everything below the level of injury and causes loss of sensation as well as motor skills.   Also affected are the bowels, bladder, sexual function and breathing.   I stayed in the (Intensive Care Unit) ICU for three weeks, which were a blur to me induced by heavy doses of medication.  There is one clear memory I have, while I was in ICU, of being unable to breath and tubes being forced down my mouth and nose to suck out the post surgery phlegm, I no longer could cough up on my own.  Many quads can only breath with the help of a Tracheotomy Ventilator implanted into the windpipe.   However, the staff succeeded in removing the phlegm that prevented me from taking a breath. 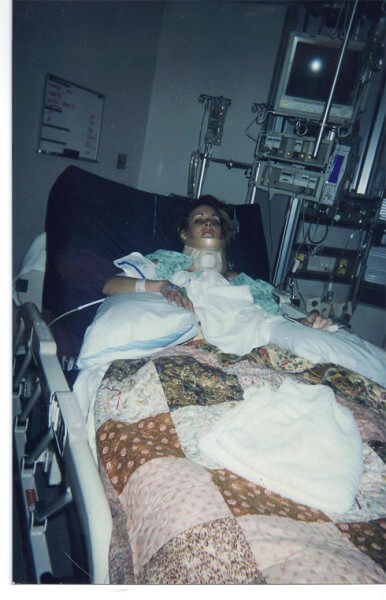 Upon being released from ICU, I was transported to TIRR Memorial Herman Rehab Hospital.  I can remember being wheeled, flat on my back in a hospital bed through the endless hallways, being only able to see the ceiling and different faces that would appear above me.  I was placed in a semi-private room that I would share with another SCI patient.  After placing a grey button next to my head and instructed to use this button with my head in order to alert the nurses when I needed them, the door quietly shut behind them.  It was at this moment reality hit me full force.  I had never felt this alone before.   My mind became a torrent of emotional thoughts like “Why did God allow this happen to me?  I can’t do this.  It’s too hard.  What happens now? What about Steve and the kids?”  Tears began to run down my face and I realized I couldn’t even wipe them away.  I wept brokenly throughout the night but I could hear a soft voice on the other side of the curtain encouraging me during one of the most overwhelming and loneliest nights of my life.  (To be continued…)

“Character cannot be developed in ease and quiet.  Only through experience of trial and suffering can the soul be strengthened, ambition inspired, and success achieved.”