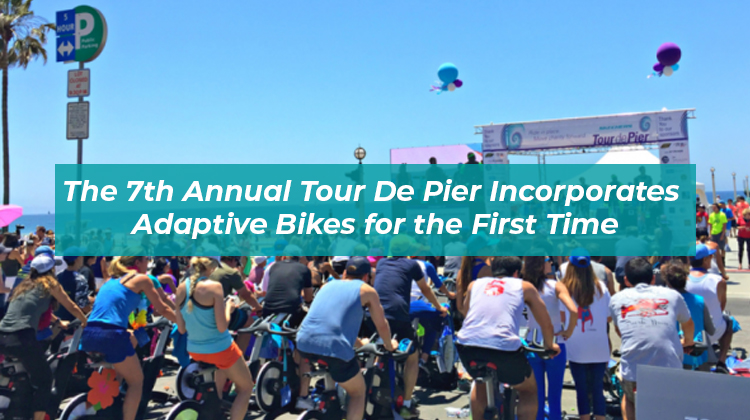 LOS ANGELES, Calif., April 25, 2019 – For the first time, the 7th Annual Tour de Pier will integrate adaptive bikes for riders with physical disabilities at the award-winning fitness fundraiser to be held on Sunday, May 19 at the Manhattan Beach Pier and Strand. An adaptive spin bike and a hand-crank bike (for wheelchair riders) will be provided to pre-registered para-cyclists to take part in one of Los Angeles’ most prominent and inclusive spring fundraisers.

The decision to add adaptive bikes had been made after Allison Compton, retired Paralympian and sports activist contacted the event organizers to ask about adding adaptive bikes for athletes with physical disabilities to its growing number of stationary bikes at the charity event.

The adaptive athletic community is greatly appreciative to the Tour de Pier organizers for being supportive and adding adaptive bikes to its wonderful event. The inclusion has dual significance as it raises awareness not only for the wonderful work the cancer charities are doing, but about the need to be inclusive by allowing everyone to ride for a cure.

I defy my limitations, like many others, and will continue to be a champion for inclusion of adaptive athletes,” said Compton.

We are honored to have the opportunity to provide adaptive bikes for adaptive riders who want to participate in the Tour de Pier. Allison’s story is very inspiring, and we admire her passion to raise awareness for both the fight against cancer and for the inclusion of adaptive athletes,” said Lisa Manheim co-founder, Tour de Pier.

As a retired Paralympian, the road to the Paralympics was not easy for Compton. In 1997, she wanted to play volleyball, but there was only a men’s Paralympic team available which she joined.

Shortly before the 2004 Paralympics in Athens, she founded the first women’s Paralympic volleyball team, which was awarded the bronze medal. Compton has had life-long interest in adaptive sports and has been a constant advocate for adaptive athletes.

Compton recruited adaptive cyclists and aspiring Paralympians to be part of her Tour de Pier cycling team, “Team Freeda” (affectionately named after her prosthetic), and set a fundraising goal of $5,000. At 41-years-old, Compton resides in Manhattan Beach and is a Paralympic athlete, inspirational speaker, wife and mother of three daughters.

Expecting to host 10,000 visitors, the popular fitness fundraiser will bring one of the hottest indoor fitness activities – stationary cycling – to the gorgeous outdoors where more than 2,000 cyclists will be riding on 400 stationary bikes while overlooking the breathtaking Pacific Ocean at one of Southern California’s iconic beachside venues to be led by the area’s best instructors and celebrity guests.

In addition to cycling, there will be a FREE Health & Fitness Expo, a Cardio Kids Fun Zone with games and activities as well as entertainment. For more information, visit www.TourdePier.com.

ABOUT THE TOUR DE PIER:

Jon Hirshberg, who started the first L.A. Cancer Challenge after the loss of his father Ron in 1997, came across the idea of doing a spin bike fundraiser after learning about an event that raised more than $3 million in one day at cycling studios across the country.

He approached his friend and long-time cycling enthusiast, Heath Gregory, about the idea of putting on a one-day event in their hometown of Manhattan Beach, CA. Coincidentally, Gregory had participated in a similar event produced by Livestrong in Barcelona during the 2009 Tour de France and vividly remembered hundreds of riders moving in unison all for a common cause. With the Hirshberg Foundation on board to produce the event and a team of board members eager to participate, planning for the Tour de Pier began.

In March 2014, the City of Manhattan Beach Parks & Recreation Department won a prestigious award for Outstanding Special Event for the Tour De Pier, presented by the State of California Association of Parks and Recreation Commissioners. Competing against other cities throughout California, Tour de Pier was recognized as an event that significantly contributes to the overall betterment of the community. For more information, please visit www.tourdepier.com.