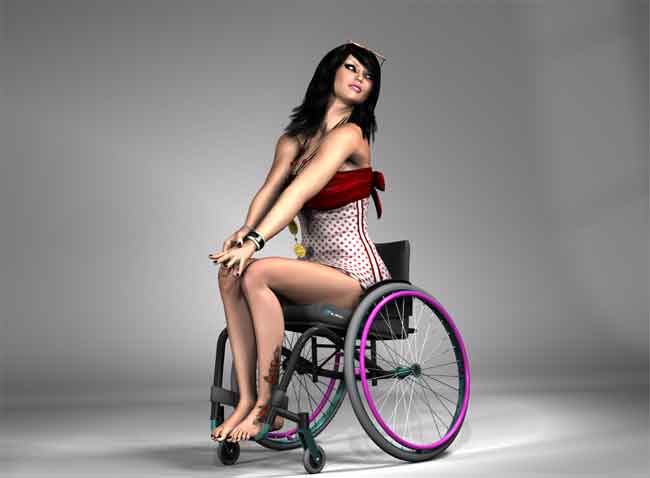 The devotee. If you’re a disabled female, odds are you’ve heard the term.

To those of you that are new to this, it’s pretty much an individual who is interested in someone with a disability, more specifically wheelchairs, amputees, and braces. My first experience with a “devo” was about 6 months after my injury, this good-looking firefighter from New York found me on Yahoo! Messenger. He chatted me up a bit and when he told me about his fetish I was floored. I couldn’t believe it existed, this dude was turned on by the fact I was paralyzed.

Shortly after that experience, I had a devo impersonate a disabled woman, and I felt violated as I had shared personal information. That was 14 years ago, and I kept my distance from devos ever since…until recently.

The idolization of woman with disabilities is evidenced on self-proclaimed devotee pages like Stellazyn on Tumblr “dedicated to the paraplegic girls and their admirers.”

Out of my own curiosity, I have decided to embark on a journey into the mind of a devo, or as some prefer, admirer.

I created a survey for devos/admirers that garnered 60 anonymous responses and interviewed multiple devos/admirers as a point of reference. This online adventure has been not only been fascinating but eye-opening. My experience has been these people are split into two types – creeps and awkward turtles. The sick creeps who like the idea of me being stuck in bed when they take my wheelchair or the ones who write me and ask if I have a “cold pussy”–at which point I redirected them to the correct fetish, necrophilia. Yes, that’s happened. Then there are the awkward turtles or as they prefer, admirers. These are the guys wanting the whole shebang with a disabled partner – kids, house, marriage, and so on.

Anyway, for the purpose of this article let’s refer to the guys who like it purely because of sex with fake profiles as devos. For those seeking more and not creating fake profiles, we’ll refer to as admirers.

In fact, after talking to multiple admirers I came to find they appear to be pretty average guys, or above average. Some of them are successful and educated, but what is it about a disabled person that does the trick?

I didn’t know the answer, so I asked. I created an anonymous survey that gathered some interesting information.

The majority of this article focuses on the “admirers.” I think we can all understand why devos are the way they are, sexual deviance is nothing new, but what about these other people? Who are these people that are not only willing but wanting to take on the challenge of a disabled partner?

What I found is the majority of admirers/devos (most of which are men in their 20’s and 30’s) are attracted to paraplegics, quads, and amputees (with a few variances). I found it interesting to find commonalities among their answers. I quickly came to realize foot fetishes seem to be common among devos and admirers. As one pointed out they like how soft the feet are of someone who doesn’t walk on them. A few started with a foot fetish that evolved into being a devo, as they appreciate the soft, clean feet. As I researched foot fetishes I found that podophilia, foot fetishism, is the most common of the sexual fetishes.

Then there was a shocking commonality among admirers. Some of them did not develop their fondness at a young age, rather, after dating and loving someone with a disability that grew into their preference.

This is specifically common among admirers, not devos, as devos often identified their attraction in their early childhood years. It seems as though these people liked helping the other person, they liked the fact they were needed, and they felt safe. Some had cared for someone growing up, and they were comfortable with that. The apparent vulnerability is attractive to both devos and admirers. Devos like to dominate but admirers are less sinister, dare I say, insecure? The confidence level of these admirers is generally pretty low. Many of them would self-deprecate without even realizing it.

Reading the story made me realize more than anything, some of these people are just desperate for love and a connection. They yearn to be needed, appreciated, and indispensable.

I talked with a woman who had relations with a quad she was caring for, and she pointed out that she felt safe with him. She went on to explain her years of sexual abuse as a child, and it just made sense. Why is it woman are the only ones we assume need to feel safe? I think many of these men have the same basis for their emotions, many men have been emotionally or physically abused by women as children.

A lot of these guys are rescuers. Whether it’s police, fire, or military, I can guarantee there will be at least one devo/admirer in a room of 100. In other words, they aren’t monsters, they’re just different.T here are also a small group that are disabled themselves. They expressed comfort in a partner that shared the same issues. Many of them have rational reasons for their abnormal behaviors.

People with disabilities generally hate devos/admirers. Many of us have had those negative interactions I touched on at the beginning, but why do we shame them?

I think the first reaction you assume they’re predators, seeking out people that can’t fight back. Let’s take that away, because as I expressed many are not. Let’s talk about those admirers, why do we shame them? They aren’t creating fake profiles, they’re open and respectful. This is where it gets interesting. I suspect we think it weird because society has desexualized disabled people. People with disabilities have practically no sexual portrayal in media, just try and imagine the last time you saw Hollywood portray a disabled individual as a sex symbol? Have we created the shame? Perhaps it’s more natural to be attracted to people with disabilities, but societal norms force admirers into hiding. Personally, I don’t want to discourage people from being attracted to people with disabilities, because people with disabilities and admirers need love, it’s just how one goes about it that I judge.

The obsessiveness and lies are concerning. One of these guys found me in his teens over 10 years ago on Myspace, and he continues to follow me now at 27. He wasn’t the only one, another guy said, “You called me a weirdo 10 years ago.” Many of them had been following me for years, watching me in the shadows after their initial “Hi” was not as well received as hoped. I’m mean it’s weird to have someone say “Hi” multiple times without a response, but still keep trying. Do they really think that works? It can’t. I think their awkward online interactions reflect their real-life relationships. I mean, in a way it’s kind of stalker-ish, but I don’t believe one would be showing up at my door anytime soon. The fact they watch in the shadows tells me they aren’t looking to actually interact with me. Furthermore, getting the full truth out of most of these guys is practically impossible. I think they have lied for so long due to shame or some other reason it’s just second nature. One man had created an entire fake persona through his fake profile. When I googled this so-called “national skeet shooter” he came up…as a completely different person. When I screenshot it and confronted him he got angry. He told me doesn’t like people not trusting him, and it’s rude to be looking into him like that. Ten minutes later he was inviting me to a villa in Lake Como. The dude couldn’t tell me the truth if his life depended on it.

“You have to understand that it’s been characterized as Sexual and Gender Identity Disorders which means it’s ingrained in brain and they cannot help it. It’s like any other form of sexuality. I wouldn’t be surprised if they make this a “normal” sexual identity later in DSM coming versions.” – Vasu Srivastava

Does this mean every man who dates a disabled woman is a devo/admirer?

No, not even close, most of the guys dating women with disabilities didn’t even know about the fetish beforehand. I’m the first handicaptain my man has ever been with, and he fell for me because I suckered him into thinking I’m awesome somehow…just kidding I lied and told him I was worth $10 million. Anyway, the point is some men just don’t care about the disability. That is what separates him from admirers, the wheelchair is a non-factor for Nick, for admirers, it’s a preference.

One of the admirer’s asked me, “Would you prefer a man that just accepted the reality or one that prefers it?” The dude had a point. That being said, I prefer my man to be into my character over my “floppy feet.” I don’t like being seen as disabled, in fact, I like when people forget I am, because I know I have not let it define me. I don’t judge those dating devos/admirers, in fact, it’s the opposite as I set up a friend with one of the admirers. For me I just wouldn’t like the constant reminder I’m disabled, just envisioning them getting off on my sticks (aka legs) is just odd to me.

They love something that has caused and continues to cause me so much anguish. It would detract sexually for me seeing my partner aroused by something that frustrates me every day. I want my partner to want the best for me, and the best thing would be working legs.

Being paralyzed is hard, I’m not talking about college level calculus hard, I’m talking climbing Mount Everest with a cold type of hard. That should not turn my partner on, that should make my partner sad. That being said, one man pointed out how emotionally upset he got over watching his date struggle, almost to the point of crying. However, he did not cry, he just watched her drag herself – while he got a hard-on. So maybe that’s false humanity.

In the defense of those admirers that will call me out if I don’t address it, there are multiple admirers that would never let their partner struggle with anything. It really is individual, each person with their own reasons.

I think one thing I learned is there’s no straight answer to why people do this. Different people had different motivators, most of which were sexual. I guess more than anything I wanted to open the door into the mind of the devotee and admirer. Flip through the responses to step into the mind and come up with your own judgment.