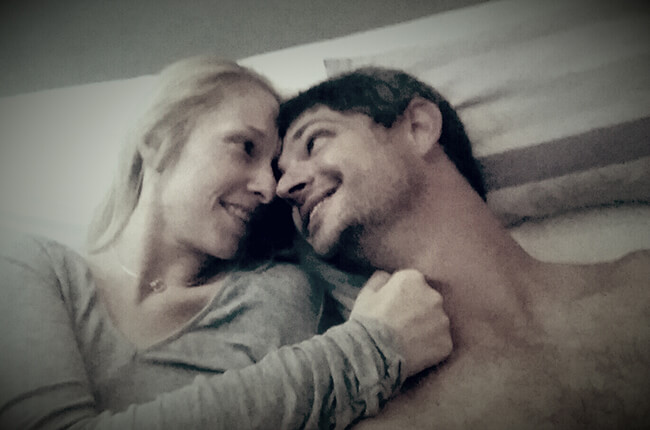 I am often asked how I fell in love with my boyfriend and many folks are generally shocked when I tell them the reality of how our relationship came to be. Perhaps a little back story is important otherwise you may get the wrong idea about me ðŸ™‚

Prior to my accident I always enjoyed exploring new things, taking adventures, try new foods, backpacking in the most remote areas around the world, and sampling men too! Women generally don’t talk about their sexual conquests or partners, but I was raised in countries where expressing your sexuality was and is completely natural. I enjoyed men like I enjoy homemade Italian gelato … I don’t see anything wrong with this. However, somehow growing up men seem to be applauded for the amount of women they sleep with, but it is highly frowned upon for women to engage in similar activities. I’ve never been one to fit the societal mold with respect to pretty much anything I do. 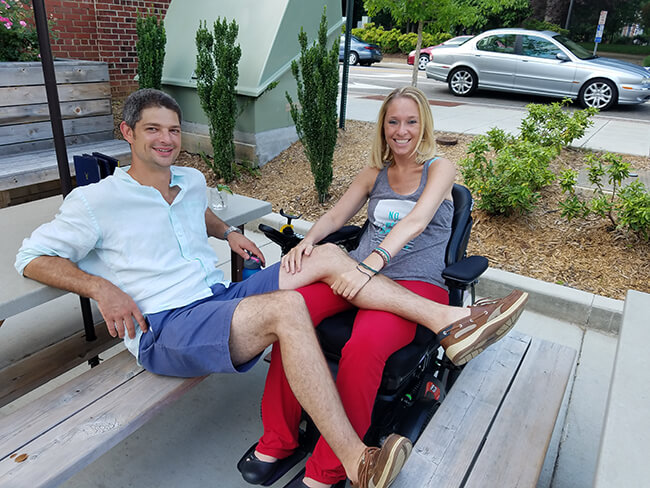 With that said, I’ve mentioned before that I’ve always been a very sexual person. When I broke my neck I went through a myriad of medical nightmares for almost 5 straight years in a row. Needless to say, men were the last thing my mind as survival was the only thought I was engaging in on a daily basis. When I move back from China in the summer of 2015 I woke up one morning and decided to just start dating. I’m not sure what came over me, but I felt the time had come. I signed up for online dating and two days later I met a guy through a friend, and we started dating pretty seriously right off the bat.

He was my first sexual partner since my accident. There were so many things for me to learn and figure out that he really was a great guy to help me through the process over the course of seven months. For many different reasons our relationship did not last, but we parted ways as friends. Several months prior to our breakup I developed my major pressure sore on my tailbone, which landed me in bed for a ridiculous amount of time. I was allowed up and down for a few hours here and there, but I was pretty much bedbound. I went through my first surgery for that pressure sore and it did not turn out well for me. I ended up with a giant 4 cm hole right over my tailbone. To make a long story short I was going to need surgery again, a major flap surgery, which was going to confine me to bed without being able to move for many months. Best case scenario I would be back up in my chair in five months and worst-case scenario if everything went wrong I would be bedbound for another two years. 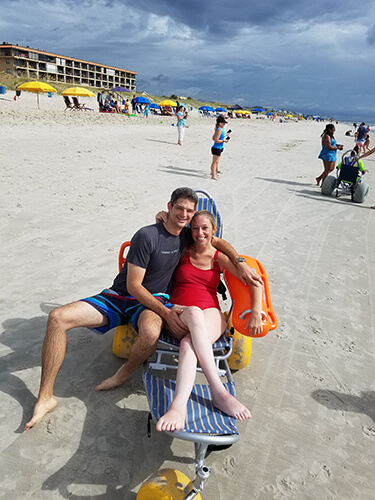 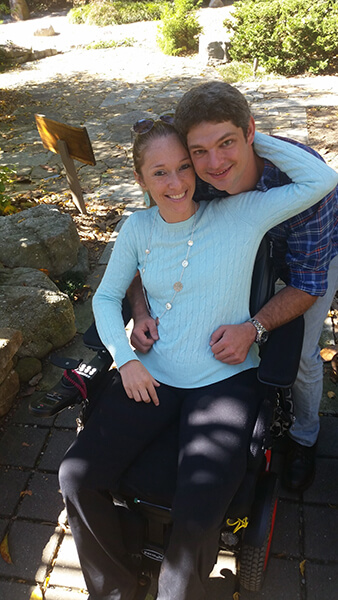 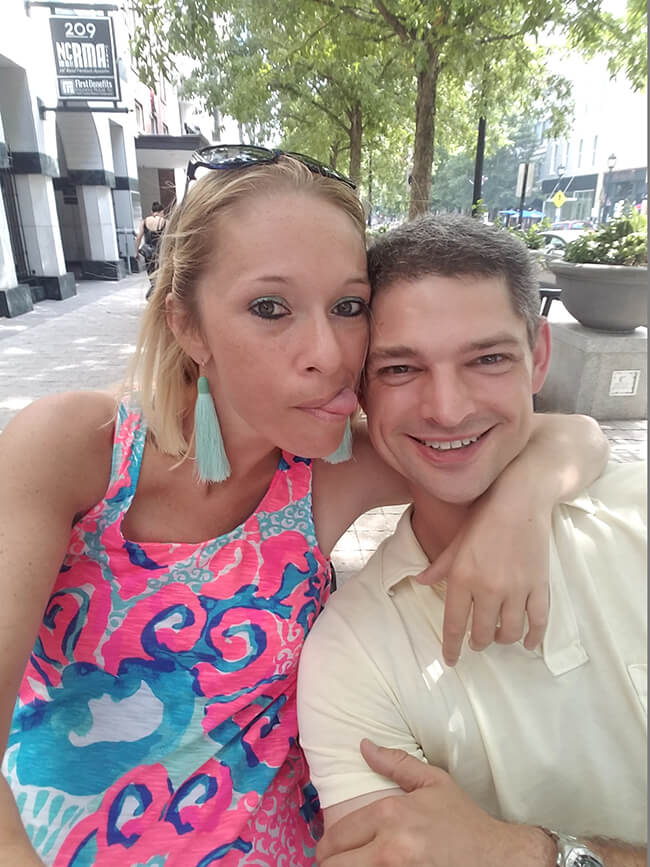 I started doing the calculations in my head of what I wanted the last several months of my life to look like just in case things went completely sideways with surgery or if I died. While I did have this giant hole in my backside I pretty much just stuffed some sterile gauze in it and covered it up when I wanted to go out because in my mind it was going to get chopped off anyway in a few months ðŸ™‚ I was what you could say “responsibly irresponsible.” At this point I had been paralyzed six years and I just couldn’t see any type of end in sight for medical disasters.

So, what did I do next? Well, I decided to approach life with different mentality for the last several months before my surgery … I wanted to have party time. I had been so responsible for so many years on end and I was exhausted by myself. I decided to sign up for online dating with OkCupid with a very specific mission.

Sleep with as many guys as I could in order to explore my spinal cord injury sexuality before it might be too late. A simple mission you may say … A ridiculously irresponsible mission others may comment … A wildly insane mission yet others may respond. To me, it was the most fun, wild and exciting thing I could think to do before I went under the knife once again for a seventh time in six years. Truth be told I think I would’ve rather experienced wilderness adventures like skydiving, hang gliding, rock climbing, skiing, etc., but with a giant hole in your behind that simply was not an option. I had to reassess my goals and this is what I came up with!

I thought it might be challenging to find guys just to sleep with in a wheelchair, but, to my surprise, I didn’t have any problems. I’m not sure if some of the guys slept with me because of my wheelchair, because of the way I looked, because of the way I acted, because they were curious … who the hell knows. Truthfully, I didn’t really care. I told them the basics about spinal cord injury, but as I wrote about in one of my blogs on Qurikyquad I created something called “Underwear Dates.” Basically after I would meet these guys several times I wouldn’t invite them up to my bedroom where I would be fully laid out in my underwear and lingerie.  I guess you could call it Easy Access, but I didn’t have time to teach them how to undress me because I was on a time clock after all.

I think some of my caregivers at the time thought I had lost my mind, but for the first time in so long I simply did not care what anybody else thought. 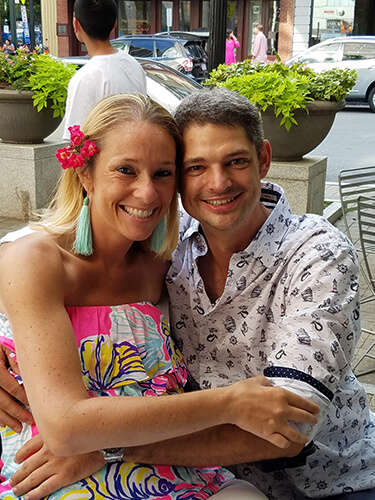 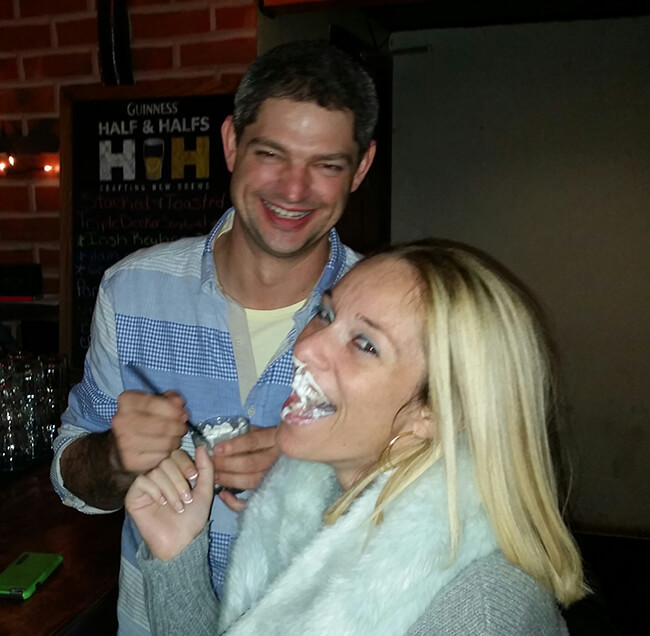 I usually wouldn’t sleep with more than a handful at a time and then I would rotate them out. Finally the time came when I received my surgery date and I had several weeks left to go. I made all my preparations and the only thing left to do was to break up with all my men. They all understood and said that when I get better give them a call and we can all get together. I hesitantly agreed, but I was happy to just have the fun memory.

My now boyfriend was one of these gentlemen callers. I really did like him and thought he had a lot to offer, but I certainly wasn’t going to ask a guy I met 4 to 6 weeks prior to hang around with a C6 quadriplegic who was going in for major surgery, who was going to be laid up in bed for God knows how long, and with hundreds and hundreds of staples in my ass. I simply didn’t think this was fair to ask, nor did I want any man I had been sexual with to see me in the ICU. 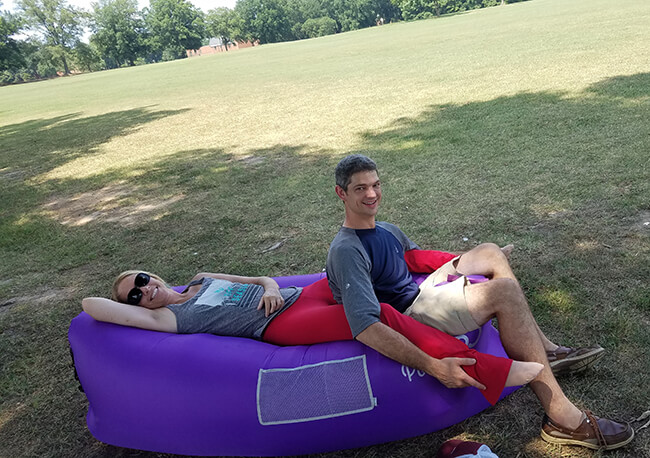 I called to break up with him and he would not let me. He couldn’t understand why on earth a surgery would deter him from dating me. I thought he was an alien … I couldn’t understand why he would want to hang around with someone in my situation. He told me he wanted to get to know me the old-fashioned way by talking. I literally could not believe my ears … Did they even make men like that anymore? Was he from another planet? Maybe he was on drugs? I simply couldn’t figure it out. I had always been with the wrong kind of guy my entire life, so clearly I was not accustomed to a gentleman.

Several days before the surgery I still could not make up my mind if I was going to let him hang around or not. He called me on the phone and formally asked if I would be his girlfriend. I kid you not. I was so startled I actually hung up the phone on him. I had so many things going on in my life I couldn’t possibly fathom the idea of having a boyfriend throughout the whole process. However, something inside me called him back and said yes. I don’t know what I was thinking at the time. I really liked him, but I didn’t really think it would go anywhere, and that he would probably go running for the hills once he came to the ICU. I was prepared for this.

Well, to my pleasant surprise, he visited me in the ICU several days after my surgery with flowers, teddy bears, plenty of kisses, and a giant smile. He was pretty much thrown into the lion’s den because he got to meet my dad and brother, and other family members right away. This was probably not the ideal way for your new boyfriend to meet your family. Anyway, he continued to visit me every few days in the hospital for weeks on end until I returned home where I was then confined to a specialized bed for many months. 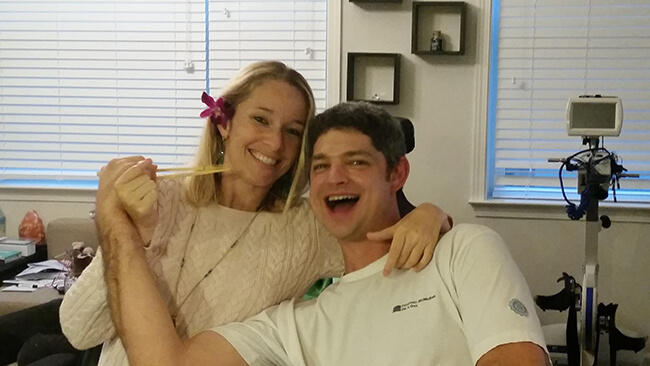 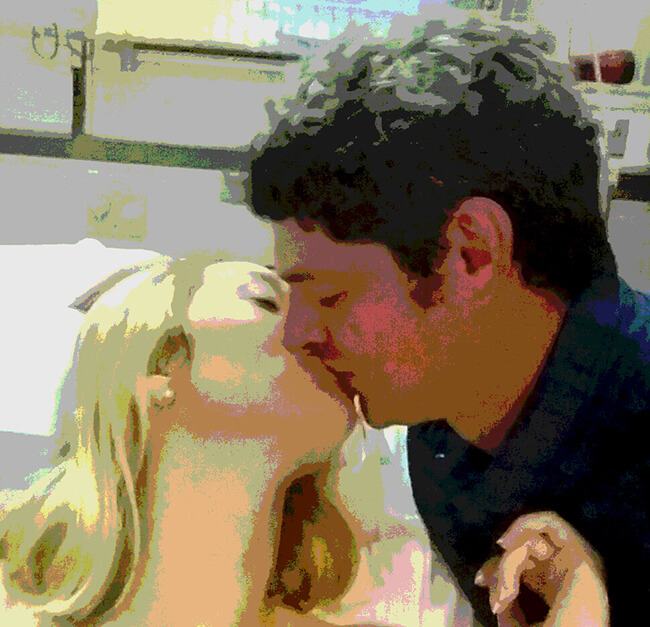 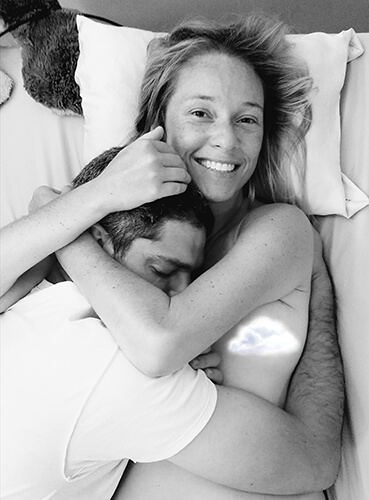 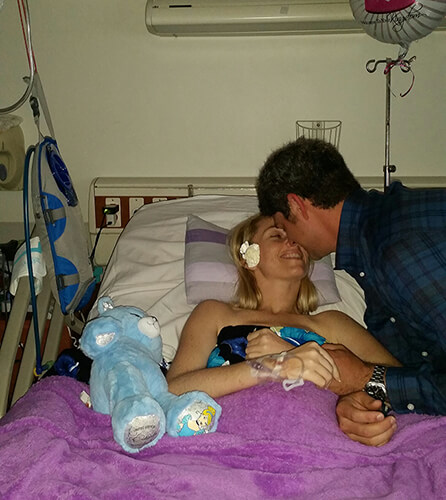 He just kept coming back … I was still in amazement. He would bring me little treats, trinkets, sweet words, and intellectually stimulating conversation. We talked for hours (yes of course there was some making out still… We are only human :-)) I really did not want a boyfriend generally in life because I was still on a mission to explore my sexuality being paralyzed.

As the months rolled on we really started to build a bond with one another and it was a completely new and unexpected feeling for me in life. Forget the wheelchair for a second … Apparently I had never learned how to be in a proper relationship. I had dated guys for years in the past, but I always made sure I had 1 foot out the door as a defense mechanism. My boyfriend completely turn this around for me, and, essentially, taught me how to love. I can’t believe I spent 30 something years my life and didn’t know what it felt like to be in love. I’m not talking young wild and crazy infatuation love, but the type of love where you compromise, talk through things, lean on one another, and so much more. Of course it helped we were and are very sexually attracted to one another… I think it’s challenging to have a relationship if you don’t have this.

So, there you have it … I had a mission to explore my sexuality by sleeping with as many men as I could get my little paws on before a potentially life altering surgery, and I ended up falling in love. Over a year and a half later we are still going strong. This was an unexpected and entirely welcome end to this twisted fairytale ðŸ™‚ 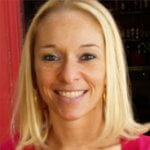