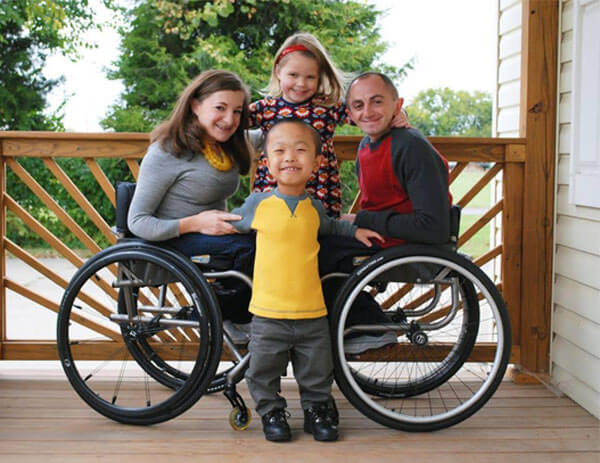 In the first part of our series, we discussed fertility treatments and surrogacy and learned about the personal story of Katie, an unmarried woman who wants to start a family with her boyfriend, but was finding obstacles due to her marital status, and being a paraplegic. In this part of the series, we will discuss private and international adoption, as well as foster-to-adopt, as options for women with disabilities.

While it is important to reiterate that getting pregnant and giving birth is more than possible for so many women with disabilities (check out Jen Goodwin’s heroic birth story here), what happens when a woman has tried to give birth naturally or via fertility treatments with no success? Or, she and her doctors decide it is not in her best interest due to possible complications to her health or the child? The next option many want to explore is adoption.  So, let’s take a look at some of the valuable information we have gained in exploring this subject.

Some states are trying to block adoptions by unmarried women. Take, for instance, the laws in Arizona. According to Unmarried Equality, “Arizona recently enacted a new bill which states preference that a child be adopted by ‘a married man and woman.’ While single people can adopt, there are certain conditions in which they would be considered: no married couple is available; the single person is the child’s legal relative; the child would otherwise be placed in extended foster care; a “meaningful and healthy relationship” exists between the child and the single person; the birth parent(s) places the child with the single person; or the child’s best interests require adoption by the single person.”

Arizona’s law indirectly poses a challenge, as adoption can prove difficult for people with disabilities who consciously choose to remain unmarried to their partner to avoid losing health benefits that they need due to the higher costs of living associated with disabilities.

So, it is important that you find out your own state’s adoption laws to determine if adopting as someone who is unmarried is a viable option. Adoption.com breaks down the laws of each state, including who may legally adopt children in “Parties to Adoption.”

Furthermore, although discrimination against prospective adoptive parents is unlawful, very few states address this specifically. In searching through the laws of all 50 states, we discovered that only Florida, Hawaii, Idaho, Maryland, and Missouri specifically state that disability is not grounds to be determined unfit for adopting a child.

Interestingly, we have learned that private adoption agencies are NOT allowed to discriminate based on disability. To determine if prospective parents are fit to adopt, a safe home study is done in which a social worker explores whether a child will be safe in a particular home. There is a form for doctors to fill out, but having a disability is not grounds for your medical records to be requested. This can only happen if you have a communicable disease.

Part of the home study questions about how prospective parents will handle certain situations that may arise. For instance, what would you do in the middle of the night if there is an emergency? The potential adoptive parents must have solid answers as to how they will address an emergency. This must be based on child’s needs and circumstances as well as parents’ needs and circumstances.

Example: If a person with a disability requires assistance from a care attendant, they can answer that in an emergency, the care attendant will be on call to help them help their child.

For those considering Private Domestic Infant Adoption, which can cost around $40,000, it is important to note that you cannot be barred from working with an adoption agency in the U.S. because of your disability. Carrie Ann Lucas, Esq., who is the Executive Director of the Center for Rights of Parents with Disabilities, notes that if you do a private adoption, you are at the mercy of birth parents that may hold prejudices against disabilities. However, the good news is that your rights are protected under the Americans with Disabilities Act (ADA). According to Madelyn Freundlich, former executive director of the Evan B. Donaldson Adoption Institute, “[c]ategorical rejection of individuals with disabilities as prospective adoptive parents…will violate the ADA and expose adoption agencies to liability.” So, with patience and persistence, private domestic infant adoptions are possible for parents with disabilities.

To gain more insight into the process and to seek guidance, we recommend Through the Looking Glass, a renowned organization that works with parents and prospective parents with disabilities. For those considering their options, Through the Looking Glass offers a resource entitled The Adoption Experience: A Prospective Guide for Parents with Disabilities and their Advocates, by Ella Callow, JD.

Aside from domestic adoptions, another avenue to consider is international adoption. Unfortunately, though, as Lucas, explains, there is often a great deal of discrimination involved when women with disabilities pursue international adoptions because most other countries don’t have an equivalent of the Americans with Disabilities Act. It is up to adoption agencies to inform those looking to adopt policies of other countries regarding parents with disabilities, as this is the ethical thing to do before accepting them as clients and taking their money.

Being unmarried would not necessarily be an issue, but again, you would need to understand the adoption laws in the countries you are considering to adopt a child from.  Angelina Jolie and Madonna are examples of the many unmarried able-bodied women who have been able to adopt internationally.

In some cases, Lucas notes, an exception is made when people with disabilities are looking to adopt a child internationally who has the same disability as they do, as is the case with the Ayers family.

As Kara Ayers states in her heartwarming adoption journey video: “Our policies make international adoption easier [for people with disabilities] than domestic, because of our belief systems.” She also fears losing her children, as Ohio law specifies disability as a sole cause for removal of the child. “A child can be removed…due to the physical disability.” She wants the code addressed, so parents with disabilities have the same rights and protections as non-disabled parents.

This is something that is currently on the horizon, and it can’t happen soon enough.  An article from YouthToday reveals that according to the National Council on Disability’s Report, “Rocking the Cradle,” “In families with a parent with a physical disability, 13 percent reported discriminatory treatment in custody cases.” Parents and foster parents with disabilities can face discrimination in the child welfare system when officials question their ability to care for their children simply because they have a disability. Parents with a range of physical disabilities were vulnerable to having their children taken away from them. Prospective parents with disabilities who seek to adopt or foster a child were also often not given the opportunity to do so. Fortunately, new federal guidelines are now in place that will protect both parents and prospective parents with disabilities from this type of arbitrary discrimination. As the YouthToday article explains, “technical assistance guidelines released in August 2015, agencies within the U.S. Health and Human Services (HHS) and Justice departments (DOJ) spell out how the Americans with Disabilities Act protects parents with disabilities. They are entitled to individualized treatment and full and equal opportunity to participate in the child welfare system.”

This is a huge win for disability advocates, but is it enough? People with disabilities deserve the opportunity to experience the rewards of parenthood, however they choose to pursue it.

If you are considering any of these options, stay tuned for part 3 of our Parenting Series, in which we will hear from another woman, Bethany, who has years of valuable experience that anyone considering fostering or adoption could benefit from learning.