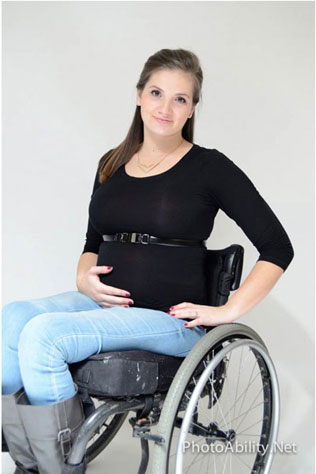 Welcome to part one of our two-part series on motherhood and disability.

There are 27 million women with disabilities in the United States according to Centers for Disease Control and Prevention.[i]

Many of these women will have babies independently and the old fashioned way, via cesarean or natural birth.  The number of woman on social media who are pregnant on wheels is like a positive epidemic. These ladies are making love and making babies! Of course, these days, we can share the news, progress, and images every step of the way. This gives hope, inspiration, and courage to those who are following. We learn what crib to buy, what’s the best way to carry a child while rolling, and all the details that give new moms an edge. Who needs a book when we can watch and learn via private Facebook groups and blogs, such as:

However, a similar number will learn that conceiving and carrying a child is not possible due to infertility, high risks of pregnancy, or complications related to their physical limitations.

Some of the health complications that a woman with a mobility disability such as paralysis might experience during pregnancy include: low blood pressure, urinary tract or kidney infections, pressure sores due to increased weight, and autonomic dysreflexia (a condition that dangerously raises blood pressure in response to pain stimuli below the level of injury). In addition, she may experience reduced or total inability to perform normal daily activities such as dressing, transferring to a toilet, bathing, or driving while carrying the additional weight of pregnancy.

So, for many women who became disabled through accident or illness, or who were born with a physical disability, the unfulfilled lifelong dream of having a child becomes yet one more loss.  This should not be the case. This is a challenge that needs to be examined collectively by society, and overcome in order to give these women an equal opportunity to become the great mothers they are fully capable of being.

If you are unable to conceive due to a medical condition or disability, what are the options?  Some of the obstacles faced by women in search of an alternative to natural childbirth are:

There are two main options for surrogacy: traditional surrogacy and gestational surrogacy. The American Society for Reproductive Medicine explains traditional surrogacy as “a treatment in which a woman surrogate is inseminated with sperm for the purpose of conceiving for an intended recipient (parent(s).” [ii] The cost of this process, according to Circle Surrogacy, is at least $69,000.[iii]

Then, there is gestational surrogacy, explained by the ASRM as a process “in which embryos created by the intended parents’ own egg and sperm are then transferred into the surrogate’s uterus.” [iv] For a woman who is a US resident requiring the assistance of a gestational surrogate and an egg donor, Circle Surrogacy estimates the cost will be at least $88,400.[v]

If a sperm donor is needed for either of these processes, it can add an additional cost of anywhere from $200-$700 to purchase a unit of sperm.[vi]

If you happen to live in a state like Arizona, surrogacy is not an option, even if you have the money. In Arizona, Indiana, and Nebraska, surrogacy contracts are not enforceable. In New York, Michigan, New Jersey, Washington State, and Washington, D.C., surrogacy is completely illegal.[vii]

Infertility Treatments: A Bump in the Road

One infertility treatment can cost up to $12,400, according to The National Infertility Association, Resolve.[viii]

In Rocking the Cradle: Ensuring the Rights of Parents with Disabilities and Their Children, the National Council on Disability shares research from Dave Shade that notes: “Because disability has only a neutral or negative impact on fertility, people with disabilities who wish to have children are equally or more likely than the nondisabled population to experience infertility. Thus, it would be expected that at least fourteen percent of heterosexual couples trying to conceive, in which at least one partner has a disability, are infertile during any given year, and at least one sixth of such couples will experience infertility sometime during their relationship.” [ix]  Because of this, the cost is an unfair obstacle that creates an uneven playing field for those with disabilities who do not have the money to accommodate it. In many countries, such as France, this barrier is not an issue as fertility treatments are a covered expense. If one is unable to conceive, it is a medical condition and should be covered like any other medical issue by insurance, allowing the process of child birth to be equal for all.

But under current law, the Department of Veterans Affairs is banned from covering in vitro fertilization, sperm or egg donation and surrogacy.

Senator Tammy Duckworth has started a campaign to gain public support to compel Congress to lift the ban on VA coverage for IVF.  Her Action can be supported here. This can help pressure insurance companies to follow suit.

Katie’s Story: “One ‘No’ after another”

Katie and her boyfriend are one of those couples struggling to find a means to have the family they both dream of creating together.

Katie is now 41, and she met her boyfriend after she became paralyzed in 2010. The cause of her paralysis was a syrinx, or fluid-filled cavity in her spine, at T-6/T-7 that was expanding and causing spinal-cord compression. Her symptoms began in 2009, starting with clonus, difficulty walking, and some loss of bowel and bladder function.

Katie underwent surgery in 2009 and shunts were placed in her back. Yet, she was still not walking very well and couldn’t stand for very long.  She wanted to stay positive and used mind over matter, but her symptoms persisted. In 2010, her mother-in-law insisted she get a MRI.

When the doctors went in to fix the syrinx, they discovered it had moved higher in the neck and the shunt had gotten loose. Katie’s spinal cord had to be de-tethered. The surgery caused her to lose function at the T-6/T-7 level and she was paralyzed and now dependent on a wheelchair for mobility.

Due to her new disability, Katie was unable to work and her husband left her. She was left with nowhere to go, so she moved back in with her parents.

The pain Katie experienced from being deserted by her husband was “much harder than becoming paralyzed,” she said.

But in time, she learned to be independent again; using a wheelchair, driving, and enrolling in a MBA program.  She started dating on eHarmony, hoping to be able to love and trust again. Katie is a beautiful and vibrant redhead with a contagious smile and a noble demeanor. When her now-boyfriend saw her as a match on eHarmony, he liked her profile. Then, he realized she was in a wheelchair and, because he’s got the logical personality that comes with being an engineer for a living, he contemplated dating her for four days, doing research on her disability prior to writing to her. “I would be stupid not knowing this girl,” he said. 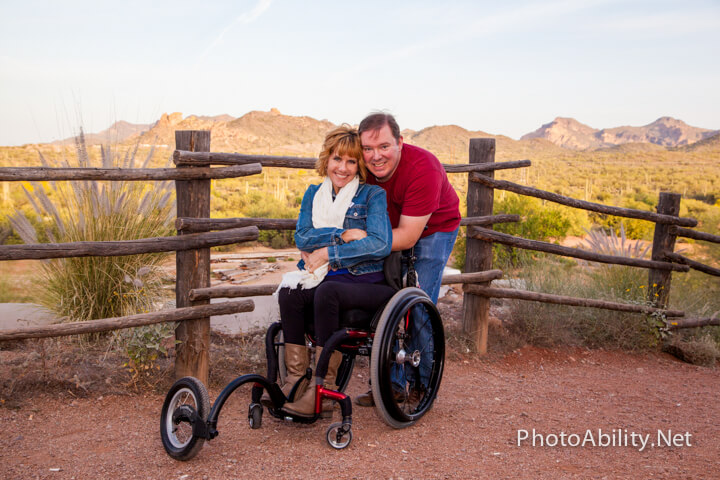 Katie and her boyfriend have now been together for four years. They share a home and have tried unsuccessfully to have a baby on their own through fertility treatments.

Then, in 2013, Katie fell to the ground during a transfer when her wheelchair moved. This caused the shunt in her back to break and she underwent surgery again, resulting in a clipped cord at L1.

Her condition and function worsened. She lost all tone and spasms, and her ovulation stopped. Her bowel/bladder became flaccid, and she is now facing surgery to help the condition.

Even after eight surgeries, failed fertility treatments and a medical issue that continued to deteriorate, Katie still has that powerful and innate desire to become a mother.

She set out to learn more about adoption and surrogacy as possible options. One agency after another told her that this was not possible for someone in her position, namely disabled and unmarried.

“If I wasn’t disabled, I would be working”

In a perfect world, Katie would have her medical issues under control, be working, have healthcare, be able to get married, and adopt a baby.  This is still very much the possibility that she is working toward. However, at 42, she knows it is time to act and not wait for the perfect situation to arise before exploring another road to parenthood.

One possible avenue is the process of “foster to adopt.” This allows unmarried and disabled people to adopt foster children because these children are in great need and the same rules do not apply. There are 17,000 children in the Arizona foster system as of this writing. Yet, with this being her first child to nurture, she is understandably afraid she will fall in love and get hurt if the baby is taken away to be returned to the parent. Another concern with foster to adopt is that many of these babies have fetal alcohol syndrome which can lead to behavior problems that would be more difficult to manage from a wheelchair.

Katie “would love to help a child that exists” through adoption but, even if she could, adoption is expensive.

A private adoption, where the mother can select potential adopters is, according to the gynecologist she saw, a long shot as well, because “nobody is going to choose you if you are in a wheelchair.”

So far, “this whole process was one ‘no’ after the other,” Katie reflects sadly. But she has not given up, and either should we, as a society in working to overcome the issues these woman face to become the Mothers they deserve to be.

In Part TWO of our Series: We will be examining in more detail International adoption, private adoption, and foster-to-adopt.

Cover Image of Model Bridgett by Tom Kershaw for PhotoAbility.net

She was a Former Dancer, Accident Survivor (C 6-7 Spinal Cord Injury resulting in incomplete Quadriplegia 1985), College grad (BBA Finance 1991 U of Miami), with a background in Sales and Marketing and Non Profit Development and Management.

She is now embarked on new path creating a market for Disability Inclusive Stock Images with the creation of PUSHlivingPhotos.com and publishing an online enterprise: PushLiving.com. The mission is to create Inclusion for people with disabilities through stock images for advertising, marketing and editorial uses, providing accessible properties for travel, swap or purchase, publishing an online magazine for improved health and well-being, providing information and opportunities for Accessible Travel, and operating an online store with products that improve lives.

She is most passionate about building a network of people with disabilities who are empowering, supporting and creating a more inclusive world. Personally, she is a mother of two beautiful, wise and exceptionally bright young women, and residing in South Florida.