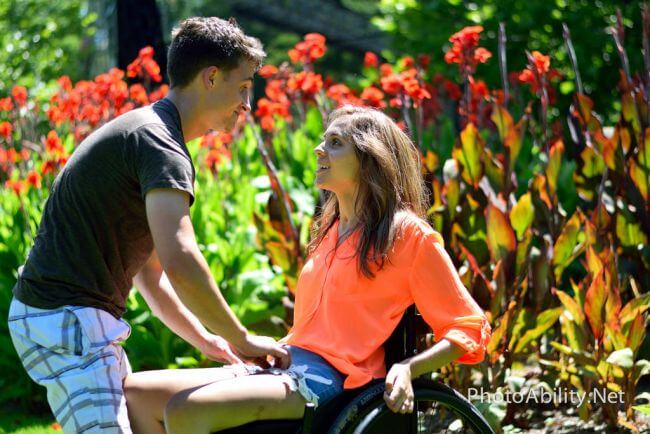 How would you define love? Have you become disillusioned?  Does the marketplace approach to love in this digital age make you feel as though it has become a commodity to be traded or played out for the best outcome? Has it all become a game of chess, with the winner capturing the most hearts and status? Does the proliferation of what is being sold as the symbolism for the most desirable attributes of sexuality overwhelm your core values and romantic nature? Have the most admirable qualities in men and woman become their body parts? I mean, “It’s all about the bass,” right?

Well, let me share a story that will restore your faith in love being about the heart. This is a story as pure and sweet as real love is supposed to be, and can still be for those who choose to believe in it.

It is the story of a beautiful, fresh-faced girl named Emily and the boy who would show her that it was worth her trusting in him with her body, her life and her most valuable gift-her innocence.

How They Came to Be

He wasn’t supposed to be in Texas.  This boy of 18 had spent his life in Nashville, not leaving until the summer of 2012.  He went there to attend college and was living with his grandmother and working.  He was offered another job and he said “no” three times, but then finally agreed to try it.  Fate was unfolding.

Emily was just 15-years old and she took a job for the summer at the exact same place.  They were instantly attracted to one another and began to “mess around” as teenagers do. She was a virgin and had made the choice to not go further, but they had spent time alone and “hung out” three or four times before the day that would change both of their lives forever.

The Day of Summer Fun ending in Tragedy

On August 13th, right after her 16th birthday, Emily was driving with three other teens – two girls and a boy.  She and the boy were in the back seat.

The driver lost control of the car. The Volkswagen Beetle ended up rolling over into a ditch/creek because there was no guard rail to stop them.

No one was seriously hurt except Emily, who crushed her C5 vertebra.  She is now an ASIA C4-5 with a plate in her spine. She can move her wrist and two fingers on her left hand, and she can balance herself sitting up. She can move some of her toes but is unable to walk or stand unassisted.

After she was discharged, she went to Project Walk in Addison, Texas which is near Dallas. She didn’t have the best experience there and credits her progress to “natural recovery” and her own work at home. She stands in a standing frame and does a FES bike for her legs and e-stim for wrists three days a week to maintain muscle tone.   “With a spinal cord injury, you can work hard every day and never see results. When you don’t see results you want to see, that can be difficult, but a lot is beyond our control.”

Emily was going into her sophomore year and due to start school two weeks after the accident occurred. Unfortunately, she didn’t get the empathy and support she felt she deserved. “There was a lot of hard feelings in this small town.”

So Emily decided not to go back to school, opting instead to get her GED.

She is now in college studying speech pathology, something she had wanted to do before the accident.

She is getting most of her course work completed in community college. In a year, she will be transferring to University of Texas where there is a program that will pay for those with spinal cord injuries with a 2.5 GPA or higher. Emily is as smart as she is beautiful and her GPA is much higher.

And Then There is This Boy

Drew was there and as Emily said, he “stood by me after accident.”  He has never left her in the three years since.  “As a 21-year old male, he could be out dating anyone else but he stays with me. He understands the limitations I have. It is a big challenge.”

Both Emily and Drew are now in college and he gets paid through the state to be her caretaker. They live together in an apartment while he is studying biology.

“We tried to separate care-giver from boyfriend and I know he can’t take care of me forever, but it is working out right now. He has my best interest at heart, and you don’t know true love until you have to wipe someone’s butt.  I went from thongs to sometimes needing pull-ups and it was hard and humiliating, at first, to accept myself and my new body image.”

“I got lucky. Not every boy is willing to accept me for who I am-the extra things that came along with the relationship. His love has boosted my confidence. I am more mature, smarter now.  What we have, it is more than the physical. While it is hard to not be able to do what every couple does, he is willing to let me do as much as I can.  He has taken me to farms, zoos and places that are not accessible, and he takes me because he cares about me.”

“Let us be grateful to people who make us happy, they are the charming gardeners who make our souls blossom.” – Marcel Proust 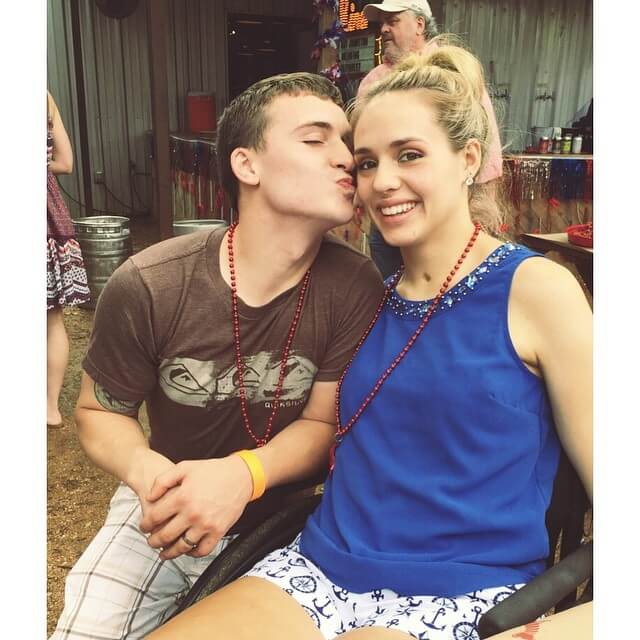 It is not all about the warm and fuzzies

Don’t assume their romance is all cerebral. They enjoy a close and satisfying sexual relationship as well, which is the norm that most don’t understand when it comes to paralysis and disability. “I lost my virginity after the accident to Drew. I figured he likes me and I am paralyzed, so what the hell?” she says with a laugh.

While Emily was reluctant to share this information, she feels it is important that people understand how effective medicinal marijuana can be for those with SCI. “I experimented with marijuana and was able to move my leg, and sex is like the normal sensation.  The THC, it wakes your body up, and lessens muscle spasms.”

Even with Love by Your Side, This Injury is No Walk in the Park

Emily is not immune to the burden of being a young girl without the ability to control her body. She recently started taking anti-depressants, after having stopped taking the ones that were given, “against my will in hospital, which made me more depressed and constipated. They assume everyone who has this injury to be automatically depressed.”  She uses the medication as it helps to decrease her anxiety and relaxes her.

“I am an 18-year old girl, and not being able to move around is hard on me.  I was out having fun, got my belly button pierced, was comfortable in my own body and clothes. Now, I need to accept how I look due to atrophy and having to have Drew with me. He does everything-it is unheard of. I got lucky with someone who wants to help me, and loves and cares about me.”

“I don’t want to cry every day. It is not always super-great and super-inspiring. I am glad I can motivate but, those who have moved on with their lives, they don’t know how serious my situation is, due to other people’s recklessness. I hung around a lot of shallow people, not really friends. I have found people to not be very sympathetic.  People stare; kids ask what the hole is in my throat.  We all want to feel accepted as a human.”

“Online, it looks like I am so inspiring and all is so great, but this injury is not a walk in the park. I hate when people tell me I am inspiring, because I don’t really have a choice. A lot of people my age don’t realize, they have moved on—I have hard days.”

Drew and Emily will be celebrating three years in February. “He takes my mind off of being paralyzed. He doesn’t treat me like I am different.”

“I just want to go out and live my life, even if it is differently. I would like to skydive, go ice-skating. He wanted to take me but they wouldn’t let me out there. My parents wanted to take me with them to go snorkel.  You find your purpose in life as days go by. Until then, it is hard to accept.”

Drew is planning to take Emily to the Kevin Hart comedy show for her birthday in Dallas.  Recently he took her to his hometown of Nashville to show her where he lived. “I loved to see that,” she said.

When asked if marriage and children are in the near future, “I don’t think he wants to get married for a while. I see a lot of my friends pregnant. It is frustrating.”

“I saw Rachelle Friedman’s, (The Paralyzed Bride’s), story of her new baby,” Emily said. “As a woman, I want a baby but I am not able to take care of myself and it would be hard on my boyfriend and hard on me. Right now, I am not where I want to be. Maybe later when I have a job and can support the help.”

“After living the life of a quadriplegic you can take what you can. If can I go out with my friends and not pee in my pants, I can be happy.”

Emily would love to work in public speaking and to talk to high schools about safe driving and overcoming adversity.  “A lot of people don’t realize how precious life is, and how not to increase your risk of being in a situation you don’t want to be in, and to think about decisions before you make them.  Life can be extremely difficult if you are not careful.” For those interested in working with her as a model, spokesperson or speaker, please write to [email protected]

She was a Former Dancer, Accident Survivor (C 6-7 Spinal Cord Injury resulting in incomplete Quadriplegia 1985), College grad (BBA Finance 1991 U of Miami), with a background in Sales and Marketing and Non Profit Development and Management.

She is now embarked on new path creating a market for Disability Inclusive Stock Images with the creation of PUSHlivingPhotos.com and publishing an online enterprise: PushLiving.com. The mission is to create Inclusion for people with disabilities through stock images for advertising, marketing and editorial uses, providing accessible properties for travel, swap or purchase, publishing an online magazine for improved health and well-being, providing information and opportunities for Accessible Travel, and operating an online store with products that improve lives.

She is most passionate about building a network of people with disabilities who are empowering, supporting and creating a more inclusive world. Personally, she is a mother of two beautiful, wise and exceptionally bright young women, and residing in South Florida.