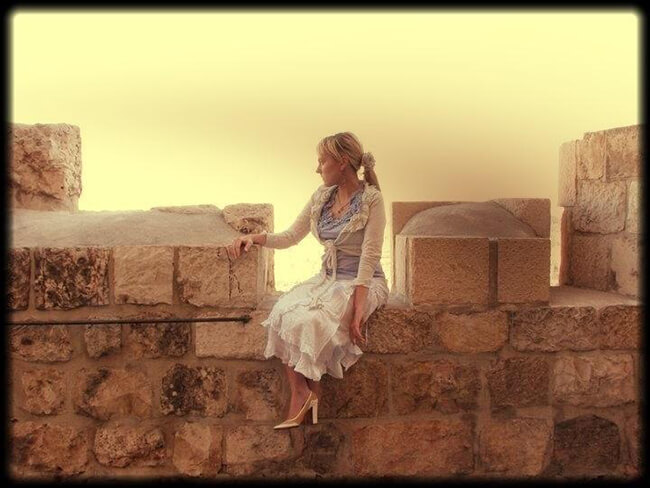 Second in a Series on “Love MY Disability Tinder” Experiment

Recently, I joined Tinder, and soon after that, I found a man, to whom I connected instantly. Pretty immediately, even before our first date, we were talking incessantly. Phone calls lasted all night long. Later on, the day after our first marathon phone call, knowing I was meant to meet another man the following night, he asked if I would meet him that night instead of waiting another four days before our first date. He wanted to beat the other guy to the punch and swipe me up before the other could. I agreed. 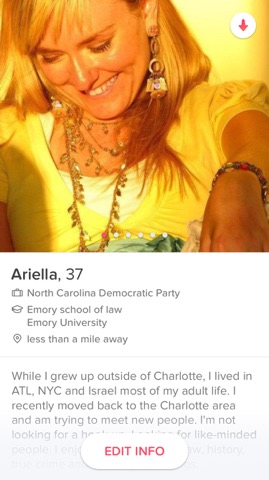 After all the talking, it was clear we were both interested, but from the first glance, the chemistry was intense. He stared at me the entire time, entranced, unable to look at anything else. I also felt this instinct but controlled the urge.

He already confessed before the first date that he was newly separated from his wife, who he’d been with since high school. Their marriage ended after she shattered his heart by straying from the marriage bed for his antithesis. I’d been down the road of having been married, albeit briefly, cheated on, and dating newly divorced men. I demanded brutal honesty.

“Are you still sleeping with your wife?” – No

“Do you expect you will sleep with her again anytime soon because that would be completely normal?” – No, definitely not. I can’t even look at her the same way. In fact, I told her about you today, and she asked if I thought anything could ever happen between us again. I said absolutely not.

“It’s pretty early out the marriage, don’t you want to sew your oats?” – No, I’m not built that way. I’m a monogamous person. Plus, I’ve already had some terrible or boring dates, enough to know someone like you doesn’t come around that often, if ever.

The few dates he had since his marriage ended either entirely lacked the flow of conversation, attraction, chemistry or the woman’s understanding of his choice to remain friends with the mother of his child. Personally, I found that attractive in him. He was forgiving, didn’t hold grudges, and would never sacrifice the beautiful gift of his child with the fruitless desire for revenge. He knew it was important for a son to love his mother and never brainwash him into believing that his mother was anything less than the beautiful woman who gave him life.

Everything was out in the open. He knew of my baggage and me of his. He had an ever-present not yet ex-wife and an eight-year-old son, who by every picture and video he’d shown me, was a precious gem of a child. 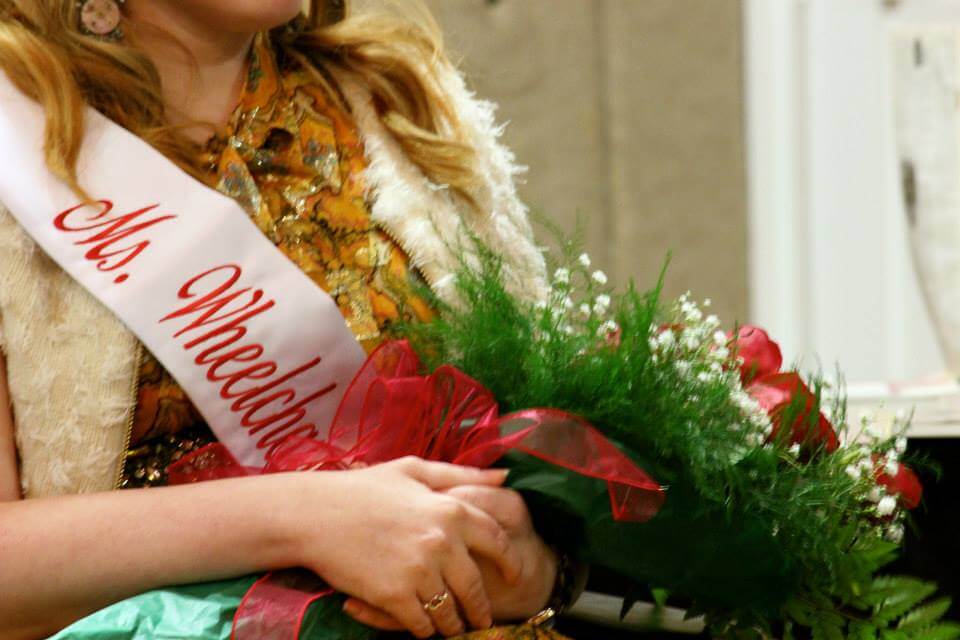 Within the first week, himself unable to eat or sleep, he admitted that his friends always mentioned this feeling of being “head over heels” for someone and having no idea what that even felt like…until now. And it was obvious even to mere strangers that we both felt that way, as they felt compelled to comment on what a cute couple we were…Something else he’d never experienced.

Having dated now for about a thousand years, I had experienced both, albeit only twice before, in a long string of losers, creeps, stalkers, con artists, idiots and the confused. I knew butterflies were a good sign of chemistry and that hormones were just flooding my brain, making me temporarily insane. He didn’t.

So, after only a few days of having met me, he was thinking and talking about the future with me in it, from making his house accessible to inventing things to make my life easier. He told me he missed me if we hadn’t seen each other in a day, and he did everything in his power to keep from saying “I love you,” instead repeating over and over “I really, really like you,” and sent countless ðŸ˜, ðŸ˜˜ and â¤ï¸s, as I did as well.  I knew it was the hormones and that it would dissipate. So I didn’t let it freak me out.

He walked himself right off the cliff of insanity. I could already read him like a book in a very short time. I even knew the syntax of his texting. After a week, I sensed, for an instant, he was slightly distant on text. The freak out had begun. He said he was feeling really scared for how much he cared about me already. He was crying at the movies when an overt act of love was displayed, he was reading my writing and crying from the pain I’ve had to endure. And he was thinking of the future. This was not normal!

I talked him off the ledge, explaining what he was going through is totally normal when you have a chemical connection with someone. I assured him that I was not looking for anything serious. I didn’t want kids. I didn’t want to get married. And I had no desire to meet his son unless we had been together for a long time. He sighed a breath of relief, and the crisis was averted.

However, his heels kept going further over his head, as did mine. The more he learned about me, the more he was amazed that women like me existed in the world. He would just stare at me, lovingly, and tell me how beautiful I was inside and out.  He saved countless pictures of me on his phone. And he began to open his heart, showing just how, in fact, broken it was. He was sure his baggage would make me run. All it did was show his humanity, making me care for him more.

He was, in the end, my best friend. I would’ve gladly taken his pain and carry his baggage, in addition to my own, any day, as I would and often do for any of my good friends. The only way I could express it was in Hebrew, which he didn’t speak and was slang, which Google Translate does not understand. The phrase is “kaparah alaich,” which is nearly impossible to translate.   But is used as an endearing way to tell someone he is irreplaceable. Literally, it means “I will sacrifice for you.” 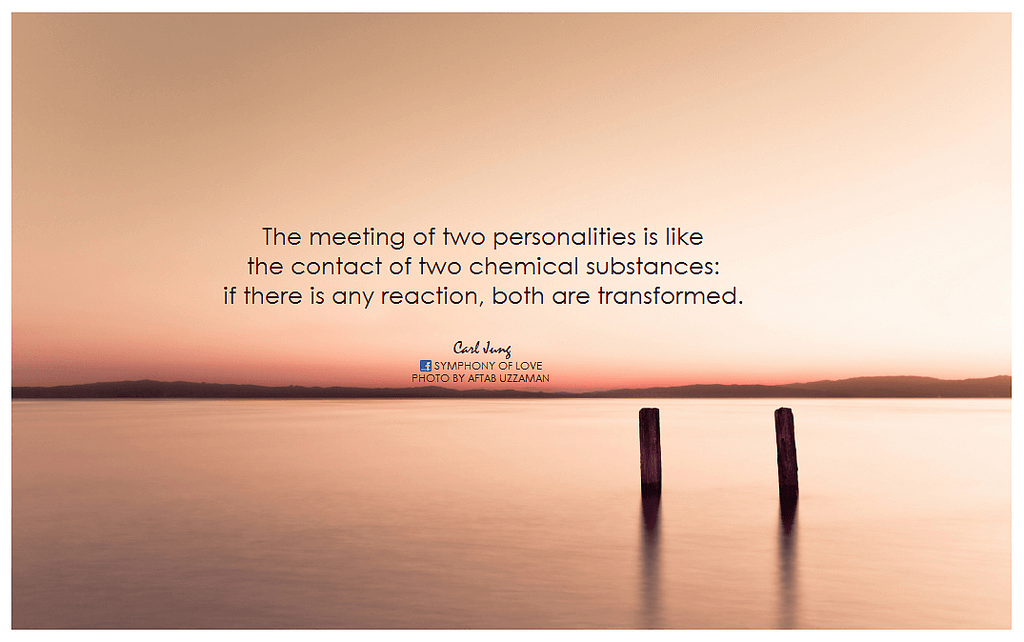 We made plans to spend the following weekend together. In anticipation, I sacrificed seeing him the entire weekend prior so he could swap weekends with his son with his wife, rather than having him for one night as per the usual every other night swap. His text syntax and voice was normal. Until it went from being extremely affectionate that Sunday to an hour later, cold. He was literally hot, then cold. I felt it coming. He just freaked himself out again.

The last time I felt so deeply for someone, another recent divorcee, he, also, suffered the same rollercoaster ride of dating me, abruptly ending things in endless tears because, despite being my best friend for months before dating, he wasn’t “strong enough” to handle my disability. I felt a repeat of this disaster oncoming, so I applied the brakes. I told him the following morning we should communicate less and give each other space because I sensed his fear. All day that day, he yo-yo’ed back and forth, making me literally nauseous. Hot to cold. Up then down. You know how the Katy Perry song goes.

Applying the breaks didn’t keep him from having a head-on collision in his head. That night, he came over in tears. Even in his emotions, he would waiver. He admitted he was scared. He felt like he was jumping from one serious relationship to the next. He said I was amazing, but he hasn’t dated enough to know what’s out there. What if there’s someone better?  He wanted to date other people, the very thing he swore he didn’t want from date one. I couldn’t go in reverse. He couldn’t look at his wife the same after knowing she strayed. How was I meant to endure what he couldn’t himself?

While comforting his broken heart, holding him, as he cried on my shoulder, I asked questions like, “better how?”  “I don’t know,” he replied. “There’s probably nobody out there better than you, but how would I know? I’ve never dated.” He met me, a woman he didn’t think existed. In his mind, he thought, no doubt, “if this exists. Certainly, a woman without all her baggage does too.”  He swore it had nothing to do with my disability, and I’m certain it didn’t work in that context. But it does in another way.

What makes me “amazing” and so different from other women is precisely because of my disability and life experiences surrounding it. It’s made me compassionate and empathetic, strong and self-confident, determined and passionate, straight-forward and level-headed. It’s what made me impervious to the intensity of our relationship and subsequent break-up. 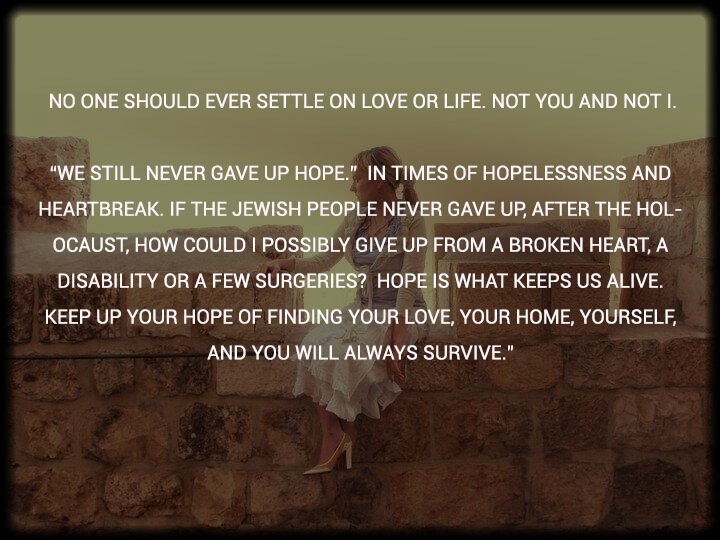 Every single man who has repeated this behavior has quickly found that I, too, am irreplaceable. They never find that perfect woman and always want to keep me close, for the thought of entirely losing me is too painful, or to keep the option of returning. They always return one way or the other, but usually, it’s too late, either because I’ve found someone else, moved away or because I’m simply too scared to be hurt again. They often live in deep regret for hurting me and sabotaging a good thing.

With every time this exact ending occurs, I wonder why I even keep trying to find someone. Am I a masochist?  In truth, I am just fine being single. If the right man comes along or returns, great, but at the end of the day, I consider myself lucky to have achieved what I have in my life, and, now, to have made a beautiful new friend.

The only time I cried during the entire break-up was when he asked me to write something in the book I gave him about the love of my life, my home, Israel. I wrote, “I hope you find the love of your life as I did in Israel.”  And I meant it. I’ll always be content having a love of my life be the country of my people, and I would love nothing more than for my irreplaceable friend and sacrifice to find a similar love, whether in me or someone or something else. No one should ever settle on love or life. Not you, not him and not I.

There is a line in the Israeli national anthem, written after the Holocaust. It says “we still never gave up hope.”  I hold this lyric very close to me for times of hopelessness and heartbreak. If the Jewish people never gave up, even after the Holocaust, how could I possibly give up from a broken heart, a disability or a few surgeries?  Hope is what keeps us alive. Keep up your hope of finding your love, your home, yourself, and you will always survive.