Wheelchair Discrimination or No?

Several years ago, I was checking out of a Lauren Millen store, carefully lifting items of clothing, as best as I could from my wheelchair, to the cashier behind the tall checkout counter.

As I awaited her calculation of the damage made, fellow customers watched in dismay.

After I made the purchase and was collecting my shopping bags, a customer and her friend asked if I had acquired the money to make such a purchase from getting injured and winning a big lawsuit. 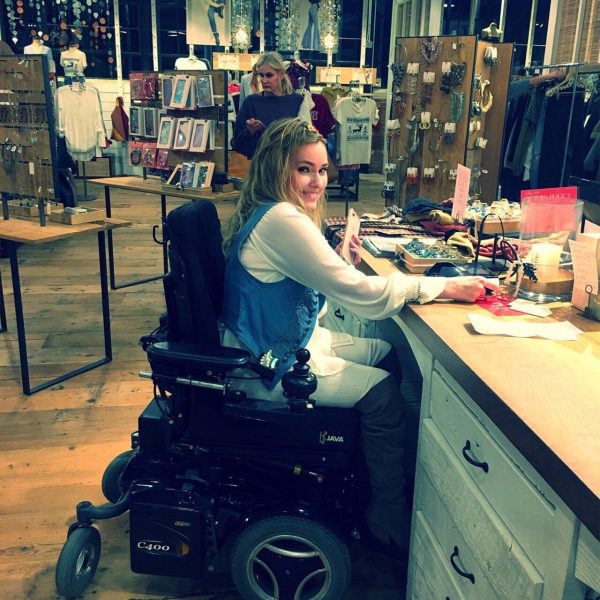 Entering a mall or storefront can be an experience of excitement. But for people with disabilities, shopping can spur anxiety. We regularly encounter discrimination at levels that result in anything from frustration to full-on panic attacks. Incidents like the one above are just minor examples of how an attempt at retail therapy can escalate to a retail nightmare in minutes for people with disabilities.

While I am an attorney by practice who works in public policy, I am a self-professed fashionista – think “Legally Blonde” meets “The Devil Wears Prada,” only on wheels. As a child with a physical disability, sports, and physical activities weren’t an option.

So I enjoyed dressing my dolls with the fiercest styles of the 80s and going on shopping sprees with my grandmother. Before I stopped walking, I would go to the mall and literally shop until I dropped. I would suffer for days from overworking my muscles, but the high of retail therapy made it all worthwhile. No pain, no gain, right?

I lost the ability to walk in 1991, the same year the Americans with Disabilities Act went into effect. As a result, places of public accommodation were only beginning to become wheelchair accessible. So, shopping began to come with more than sore muscles and the occasional buyer’s remorse. Every shopping spree was accompanied by some experience of humiliation, discrimination, frustration or tears.

Unfortunately, in the past nearly thirty years, things haven’t improved that much.

NEARLY THIRTY YEARS SINCE THE PASSAGE OF THE ADA: RETAIL IS STILL INACCESSIBLE

Some stores still have steps to the entrance, and many have portions of the store that are on a platform without a ramp. Many have aisles and sales rooms that are impossible to traverse. Maneuvering a wheelchair in these conditions is so stressful and claustrophobic that I’ve had more than my share of panic attacks. Imagine a situation where you’re being buried alive in clothes…and not in a good, clothing fetish kind of way.

Dressing rooms are often used as storage rooms for boxes and discarded, unfolded merchandise. You know. Because wheelchair-users don’t try ON clothes. We just roll right into them, and poof! Fashion gods to the rescue!

Check-out counters are often so high that I’m left looking like a child in a candy shop, waving at the cashiers and yelling to get their attention. Once my theatrics alert them to my existence, handing them the items is a challenge and paying often requires giving complete strangers my PIN number because I can’t reach the scanner.

FALSE AND NEGATIVE STIGMAS RESULT IN MISTREATMENT BY CUSTOMERS AND EMPLOYEES

But that only describes some of the lack of accessibility wheelchair-users face. The most disturbing and upsetting part of “shopping while disabled” is how store employees and customers treat us.

In the 90s, it was a regular occurrence for fellow customers to stare at me so fervently that they often ran into walls and displays. Apparently, the freak show was in town, and I was the main attraction. Today, the stares have lessened, enough for their mouths to move and ignorance to escape, like the experience at Lauren Millen.

While store employees rarely voice such ignorant comments, their behavior demonstrates that they believe negative stigmas attached to people with disabilities. Retail workers rarely offer to help me, unless I specifically request it. And, even then, they prioritize other customers and later assume I can only afford one item. The look of shock and dismay when I decide to purchase several items with another employee or at another store is a scene straight from “Pretty Woman” – “Big Mistake!”

The most frustrating behavior I encounter from the retail staff is their refusal to answer or speak to me directly – instead directing their comments to whoever is with me. The assumption that I am too unintelligent or sub-human, with whom to speak directly, is enough to make me drop every intended purchase and leave. What’s worse is when they question, in the face of evidence, whether I, indeed, made the purchases I’m returning. These experiences often result in hours of my time and money wasted. 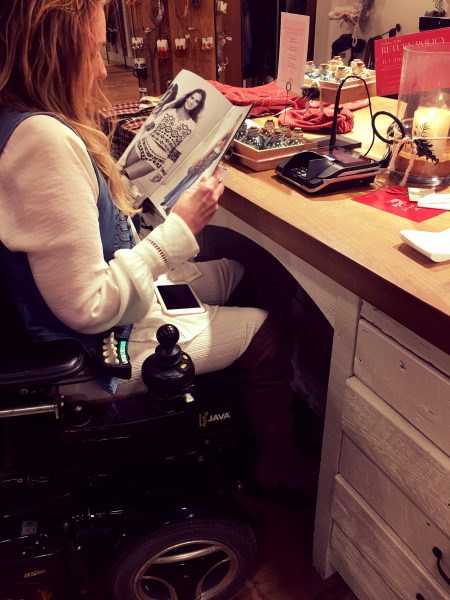 For the last couple of years, my store of choice has been Free People. They fulfill my fashion tastes while providing outstanding accessibility and customer service. My most recent visit over the holidays sums up why their stores and service are the gold star in retail therapy for people with disabilities:

During a visit to the store with my mother last December, the staff assisted me the entire time, from reaching things, finding sizes, holding items, and suggesting outfits. They even helped me discreetly pick out gifts for my mom without her knowledge, a particularly impressive feat.

The dressing room was massive with lowered hangers and a bench and, most importantly, unoccupied by boxes of merchandise. The aisles were much wider than necessary (36″). The check-out counter was lowered in an open area, so as not to block traffic and become a tripping hazard to oblivious customers.

And, most impressively, Free People has a nook cut out in front of the card scanner so that I could pull up to the scanner and reach it from a frontal approach. At Free People, all people are free to shop at their own wallet’s risk!

On the positive side, due to the outright infuriating experiences that disabled customers have in retail, we have strong brand and store loyalty. After we have one pleasant experience, free of discrimination, we often exclusively shop in those stores.

Every retail store should offer this experience to customers with disabilities, as they are required by law. But it’s also in the industry’s best interest. The disabled community makes up 20% of the population, and we have significant spending power. Adults with disabilities have a total dispensable income of $490 billion, and last I checked, we still have to wear clothes. Some of us, believe it or not, even like to be fashionable and don’t live in pajamas with old lady lap blankets.

THE FUTURE OF FASHION IS INCLUSIVE OF PEOPLE WITH DISABILITIES

Recently, brands like Diesel and Benefit Cosmetics hired models with disabilities to be the face of their companies. And designers like Tommy Hilfiger, Target and Walmart have released adaptive fashion collections for disabled customers. The future of fashion is inclusive of people with disabilities. It only follows that so should the future of shopping.

Every store should be accessible and helpful to customers with disabilities. Besides, as fun, as it is to use the “Pretty Woman” line, I will soon go broke making that point.

Ariella Barker is a Political Communications Fellow at RespectAbility, a nonprofit nonpartisan organization that works to fight stigmas and advance opportunities for people with disabilities. She has a BBA and JD from Emory University and will begin her Mid-Career MPA at the Harvard Kennedy School.